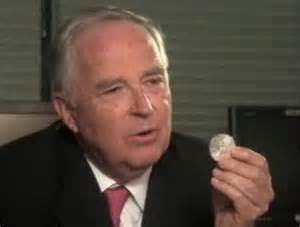 Mexican business magnate Hugo Salinas Price says that there are “many more” devaluations coming for China’s currency. Salinas Price thinks that many other countries will cut the value of their currencies because the world economy is in deep trouble. Salinas Price contends, “When China does this, that is very serious. Already, the United States is receiving huge quantities of Chinese goods. It has an enormous trade deficit with China, and now that they devalued, it’s going to get worse. There is going to have to be a corresponding move on the part of the United States. . . . This is going to be the beginning of a breakdown in international trade. Is the United States going to stand by because China continues to devalue? How much has the Chinese currency been devalued, not even 8%. That’s not going to help the Chinese much. When you have a devaluation, it has to be about 40%. Then it really has teeth in it. I think the Chinese will continue to devalue.”

Salinas Price points out the real problem comes from countries printing money out of thin air and goes on say, “This entire fiat money circus the world has been on is coming to a head. I see many comments from diverse people, and the problems are just mounting up. You have Greece with 11 million people, and if they get this last bit of money, they will have some $400 billion of debt. How can 11 million people work off a debt of $400 billion? It just can’t be done. The people running the euro are in dreamland.”

It’s not just Greece or the European Union. Salinas Price, an 83 year old billionaire, says, “The world has never been in such a plight. The world has never gotten into such a situation—never. The United States receives goods from China and sends them dollars, and they can send them any amount of dollars. . . . There is no longer balanced trade in the world. There are imbalances that are built into the system. What that has lead up to is this present chaos. This is going to come apart in a very ugly way sooner or later.”

The other big problem is the huge amount of bond debt floating around in the world. The central banks are trying to “stop a deluge of liquidations.” Salinas Price explains, “It means that the owners of the debt get wiped out. Somebody owns all that debt. It can’t be liquidated. It’s going to go into default, and that will mean a loss for all those holders of debt. . . . People think they have jillions of dollars or euros or whatever currency, and it’s all going to come to nothing, it can’t be liquidated. The debtors cannot pay. . . .Greece is the whole world. The whole world is in huge debt, which is unpayable. . . . So, this thing is like a cloud that is hanging up there, and then it begins to rain. The whole debt is going to come down like a cloud burst. We are going to be drowning in worthless paper. . . . I think the world is going to have an epileptic fit.”

On gold, Salinas Price says, “I have a feeling we may be at a bottom in gold. I also think when we see a rising trend of gold, that will be the last rising trend that we see. It will lead to a new monetary order in the world. . . . When it starts rising again, it is going to rise a heck of a lot, and that will be the last rise in the price of gold because after that comes a new monetary order. I don’t think the world can wait or there will be anymore declines in the price of gold because of speculation. This is the last gasp for gold. . . . It will be leading up to a new world order.”

After the Interview:
There are free articles and information in both English and Spanish at Plata.com.mx.

Leave a Reply to Lawrence of America Cancel reply