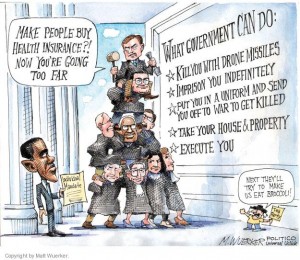 A budget has been passed in the House of Representatives by the Republicans that cut $5.3 trillion over the next 10 years.  Can it pass the Senate where the Democrats are in control?  Probably not, and that means we are back to the fight of spending reductions by Republicans and tax increases by the Democrats.  It’s election year politics at its finest.  The budget proposed by President Obama was unanimously defeated in the House.  The Supreme Court heard the case of Obama Care this week.  It will not be decided until summer, but conservative judges picked apart the individual mandate where Americans who do not purchase healthcare insurance are taxed or fined for not doing it.  The Wall Street Journal is reporting the Federal Reserve bought a whopping 61% of our nation’s debt last year.

Former big buyers of Treasuries, China and Japan, are shunning U.S. debt.  Maybe that’s why Ben Bernanke is trashing gold and questions about a gold standard.  The Fed Chief said, this week, there are “problems with a gold standard.”  You mean there are no problems with printing lots of cash to buy debt and live beyond our means?  Think $4 a gallon gasoline national average, and many experts say they expect an average $5 a gallon this year.  Housing prices fell again according to the latest Case-Shiller report.  The MSM spun this story and said it was not that bad.  But the report said it was that bad–the worst report in the current housing slump.  Home prices are the same as they were nearly 10 years ago. What recovery?  Finally, renowned economist Martin Armstrong says the next financial calamity happens in 2015.  Because of the severe and ongoing problems in Europe and Japan, many are predicting an earlier demise of the global economy.  Nothing is fixed in Europe.  The U.S. economy isn’t so hot either, but it is the thinnest fat person in the room.  Greg Hunter of USAWatchdog.com gives his analysis on these stories and more on the Weekly News Wrap-Up.