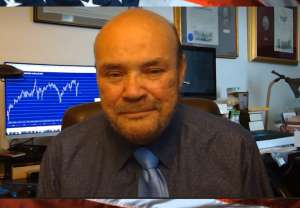 Legendary financial and geopolitical cycle analyst Martin Armstrong thinks we have come to the end of the line for the financial system, and this is why globalists are on a power grab of epic proportions.  Armstrong explains, “The system has come to an end.  They know they can no longer borrow indefinitely.  So, what is this “Great Reset’?  It is basically a move to redesign the world monetary system.  They are going to stop the borrowing that they are doing, and they are just going to print.  You also have this move for a digital currency.  Once they move to a digital currency, they can impose negative interest rates and just take money out of your account at will.  People don’t realize what this really is. . . . I believe Bitcoin was started by the government to get this whole ball going.  If I gave you a $100 bill, they don’t know where I got the $100 bill from.  However, if I give you that in Bitcoin, not only do they know I gave it to you, but they know where I got it from.  It can be completely traced all the way down.  That is a tax authority’s dream.  You have to understand what they are selling is really a totalitarian regime.”

Armstrong goes on to say, “The ‘Build Back Better’ slogan was bantered around at the World Economic Forum back in January 2019.  This is being orchestrated and deliberately designed.  Why have world leaders joined it?  That’s because they know the system we currently have now is collapsing. . . . The dollar has held up, and just look outside this country.  In Europe, the bond market is destroyed.  It’s completely gone.  What institution is going to buy a bond from Europe with a negative interest rate?  Pension funds need 8% to break even.  You have bankrupted all the pension funds over there.  It is a complete disaster.  This is the greatest financial crisis in human history, and people don’t understand what is going on. . . . Watch Europe.  It’s the canary in the coal mine for the next big crash.”  (Meaning, Europe will crash first and then the USA.)

Armstrong also predicts that, in the not-so-distant future, you will not be voting or your vote will simply not count if you vote for the wrong party.  Armstrong contends, “They’re going to rig the elections again.  There is too much at stake here. . . .When Donald Trump won in 2016, they got scared because they (globalist elites) all thought they would lose their power.  If you look at the eight points from the World Economic Forum, one of the points is by 2030, democracy must come to an end.”

On a partly encouraging note, Armstrong says, “They (globalist elites) are not going to win, but they are going to destroy the country in the process.”

Armstrong gives analysis about the possibility of removing Senators from Congress because of voter fraud and gives analysis on the possibility of Donald Trump being reinstalled in the White House.  Armstrong says regarding the duo occupying the White House today, “They have the perfect ‘dumb and dumber’ in office, and that’s what the bureaucrats always wanted to do.”

Armstrong has much analysis and data on CV19 and the vaccines to share too.

Armstrong also talks about gold, silver and why any physical asset is a good bet to own in the coming so-called financial reset.  In general, Armstrong see “chaos” coming in 2022 and beyond.

Join Greg Hunter of USAWatchdog.com as he goes One-on-One with Martin Armstrong, author of “Manipulating the World Economy,” which has 70 fresh new pages in the 5th edition of this very popular book.

(There is much more in the one hour long interview.)

To get a copy of Armstrong’s 5th edition of “Manipulating the World Economy” updated with 70 fresh pages of data and analysis on CV19 and the vaccines, click here.