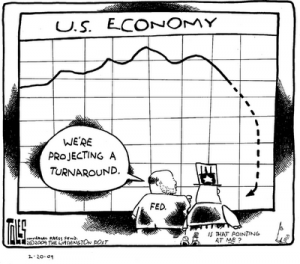 It seems the mainstream media (MSM) is waking up from its long sleep.  The dream world of “green shoots” and “recovery” is fading into staggering unemployment and plunging home prices.  Most of us in the real word have known for some time that there is no recovery.  People are not optimistic no matter how many times they are told things are getting better, and a recent poll by the Daily Beast and Newsweek proves it.  The story said, “. . . reality is beginning to break down Americans’ normally optimistic attitude. Three-quarters of our respondents think the country is on the wrong track. A majority say the anxiety wrought by this recession has caused relationship problems and sleep deficiency. Two-thirds even report being angry at God.” (Click here for the complete poll results and story.)

How can the MSM be so wrong for so long?  I think talking bad about the economy is perceived as bad for ad sales by top management in the MSM.  It is only when things get so obvious that they finally report some real truth or risk looking even more irrelevant than they already are.   In a Jack Cafferty segment on CNN last week, the question was asked, “Will Our Economy Trigger Violence In U.S.?” There is no way this kind of segment sees the light of day without people in the organization accepting the idea that things are officially bad.  That means the happy talk and wishful thinking that the economy is turning around is pretty much dead, at least for a while.  Check out the Cafferty segment in the video below:

Jack acts as if the sour economy was some recent revelation.  I talked about the coming storm clouds for the economy and how all the banks were in trouble in March 2008 on CNN.  My source, economist John Williams, also predicted it would be very difficult for whoever is president in the 2012 election.  (Click here for the video.)

A little more than a week ago, James “It’s the economy stupid” Carville said that the 2012 election could be “very rough” for the President.   The real shocker came when Carville was lamenting the unemployment problem.  He said, “. . . if it continues, we’re going to start to see civil unrest in this country. I hate to say that, but I think it’s imminently possible.” When a top Democratic strategist such as James Carville blurts that out publically, I suspect it must be common knowledge with the ruling elite in America.  Check out the complete video from his phone appearance on the Don Imus show:

There is no recovery except for the Wall Street bankers that caused the financial meltdown of 2008.  Of course, the big banks have not really recovered.  They’re just being kept on life support with printed money and government sanctioned accounting fraud.  Mybudget360.com recently ran a story that claimed the big banks are insolvent by “$3 trillion” and the FDIC is basically broke.  The story said, “In fact, the FDIC has an insurance fund that is close to negative and this institution is supposed to back up over $7 trillion in saving deposits.  How is that even possible? . . . think of the $13.5 trillion in household debt floating in the market and also the reality that 50 percent of Americans wouldn’t know where to get $2,000 for an emergency in the next 30 days if it came down to it.  The entire banking system is hanging by a thread.” (Click here for the complete story.)

When that thread finally breaks, and the economy really blows up, anger will turn to violence just as Mr. Carville predicts.  The bad economy is not a surprise to many who are looking at sources other than the MSM for their news.  For the MSM to report what is actually going on with the economy, things must be getting dire.