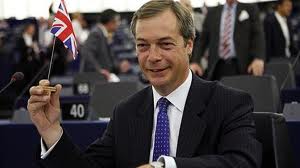 I suspect most of the Members of the European Parliament really despise Nigel Farage.  Farage  represents the United Kingdom, and even though the UK is a member of the EU, it does not use the Euro as its currency.  Farage is a straight talking truth-teller and says things about the latest Greek bailout such as, “Is this being done to help Greece? No.  It is being done to prop up a failing project because you know once Greece goes others will go as well.”   The EU does not want its Euro experiment or, as Mr. Farage says, “failing project”  to end.  This is why Greece is so important to prop up.  If Greece goes, the entire Euro currency will eventually be doomed.  In his latest tongue lashing to the EU Parliament, a little more than a week ago, Mr. Farage lambasted the caviler attitude of the EU  to the unfolding disaster.  “Carry On Up The Khyber” is a 60’s movie (comedy) that illustrates how oblivious British leaders were to the dangers facing them.  In this case, the dangers are very real, and there is nothing funny about this dire situation.  Enjoy the video and MEP Nigel Farage.  In this case, he is very entertaining: