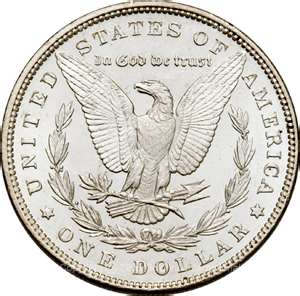 The world looked like a scary place yesterday for gold and silver investors.  There was a lot of talk about a global economic slowdown.  The price of oil dropped, and gold and silver sold off.  In the grand scheme of things, the correction was quite small.

If there is a slowdown, and there may be, do you think the U.S. Fed is going to stand by and watch the economy crash?  No way!  Expect the Fed printing press to go into high gear and shift from QE2 right into QE3.  The Fed will, once again, come to the rescue and save the day as it kills the dollar.

Another few things that are dollar negative: There is still no agreement in Congress on a meaningful cut to the deficit.  This comes against a backdrop of a record $223 billion SINGLE month record shortfall.  Fighting in Libya raged on yesterday as protesters were being shot at by police in Saudi Arabia.  None of these problems are going to be solved anytime soon, and all will put downward pressure on the once mighty buck.

Down is the overarching trend for the dollar according to Peter Schiff.  He is the CEO of Euro Pacific Precious Metals.  He is a regular on CNBC, FOX, CNN and many other media outlets.  He is also the author of the bestselling books: “Crash Proof,” “The Little Book of Bull Moves in Bear Markets,” and the recently released “Crash Proof 2.0: How to Profit from the Economic Collapse.”  I am proud to say that Mr. Schiff has agreed to become a Guest Writer for USAWatchdog.com.  He wrote a great piece recently that laid out the reasons why gold and especially silver are not only great investments but critical to your financial survival.  Please enjoy the post, it’s a very good read.—Greg Hunter.

In the world of precious metals, silver spends a lot of time in the shadow of its big brother gold.Gold, with its high price-to-weight and distinctive yellow tint, has always occupied a special place in the human psyche. Too many people across many ages, gold is simply the ultimate form of money – and, as a long-term, stable store of value for one’s personal wealth, I agree it’s hard to beat.

However, rare circumstances are aligning today that I believe will make silver the true champion of this bull run.

WHAT’S DRIVING PRECIOUS METALS?
Gold and silver are both benefiting from a perfect storm in the sector.

Dollar devaluation means that much of the ‘gains’ we see are really just losses by people holding dollars. In other words, if your dollars lose 50% of their value, it’s going to take twice as many of them to buy the same ounce of gold.

But the rally is based on more than simple inflation. Precious metals are regaining their role as the ultimate reserve asset. That means many, many more people are buying and holding these metals than at any time in the last thirty years.

Another factor is the rise of emerging markets and decline of developed markets. As billions of poor Asians, Africans, and South Americans lift themselves out of poverty by embracing the free market, the US is plunging itself into poverty by rejecting it. This means there are a mind-boggling number of new customers for jewelry, savings, and industrial products that require precious metals – and that we are becoming less and less able to outbid them for these resources with our dollars.

SILVER’S DRIVING FASTER
If the world were going to hell in a hand-basket, then I would expect gold to outperform silver. However, it is only the developed economies that are on the rocks – and only the US that faces true catastrophe. Thus, we have seen silver outperform gold for the last eight years.

The market is telling us that while uncertainty reigns supreme, the global economy will prosper in the years ahead. While gold most effectively insures the investor against economic devastation, silver offers both a shield against monetary turmoil and exposure to market growth.

THE KEY: INDUSTRIAL DEMAND
This is because silver is both a precious metal and an industrial metal. Gold is mostly precious, copper is mostly industrial, but silver strikes a fine balance between the two. And it seems as if this moment in history is perfectly suited to this balance. We are facing not only the prospect of the collapse of the international monetary order, but also the largest industrialization process the world has ever seen.

While in a past era, wood, steel, or oil would have been the most critical commodity, today silver is used in everything we hold dear: iPhones, flat-screen TVs, batteries, solar panels, etc. Asia – the new heart of the global economy – is accumulating gold, but they’re consuming silver. That makes both metals good bets, but likely gives silver the edge.

It’s safe to say the future depends on a steady supply of silver. This burgeoning demand is reflected in the latest figures: global demand for silver is about 890 million ounces a year, while global mine production is about 720 million ounces a year. We’re actually consuming scrap to make up the difference. And unlike gold, which tends to remain in a recoverable state as coins or jewelry, a large quantity of silver is ending up in trash dumps – where it is essentially lost forever.

As long as the emerging markets continue to trend toward freer markets, and consumers the world over continue to demand computers, electronics, and green tech, silver should only become more scarce – and thus more valuable. I think these assumptions are pretty safe to make.

CAN THE WORLD THRIVE EX-US?
Of course, if everyone agreed with me, silver would already be worth hundreds of dollars an ounce and there wouldn’t be any profit to be made on the trade. Fortunately, there are a couple of bogeymen in the financial media scaring the majority of investors away from silver so far.

First, some analysts still believe – bless their hearts – that the US is really going to pull through this time into a sustainable recovery. After being duped by dot-coms and then housing, they are all aboard the Treasury Express back to Bubbletown. Unfortunately, as in the previous two cases, the current low interest rate environment is merely masking an underlying economy that is vastly more rotten than it was even a decade ago. The unemployment rate is a key signal that this time, Bernanke’s magic medicine won’t work.

A second cohort sees that the US is doomed, but still thinks we will drag the rest of the world down with us. This is the school that holds that despite our persistent current account deficits and monumental external debt, the world economy “needs” the US consumer to drive growth. As I alluded to in my book, How An Economy Grows And Why It Crashes, this is like a plantation master claiming his slaves need him around to consume the fruits of their labor, or else they wouldn’t have anything to do. Well, the results are in: after an initial panic rush into dollar-based assets, emerging markets are back at full sprint while the US is still limping along.

SILVER IN A DOLLAR COLLAPSE
Just like a Hollywood celebrity, we in the US spent our time at the top of the world – and soon let our status get to our heads. And like a celebrity, our adoring fans the world over will be quick to forget us as we fall from the limelight and deal with our powerful addiction to partying and cheap money. To survive the next decade in America, you are going to want an asset that is in demand globally, but is also free from counterparty risk here at home.

I recently did an interview with a group that is making a film about living in America in the year 2019. The premise is that inflation is rampant, the economy is in shambles, and groups are springing up that do all their trading in silver rounds. While I think their timeline is quite generous, this is a fairly accurate picture of what lies ahead.

Not only does silver appreciate while sitting in your safe due to overseas demand, but it also comes in units that are ideal for use as a common trade unit. Two or three ounces of silver can buy you groceries for a week. By contrast, just try to eat an ounce of gold’s worth of vegetables before they spoil. There are fractional gold coins and bars, but they carry very high markups.

None of us have had to think about these things in our lifetimes, but it is not abnormal in history. Soon, understanding precious metals will be as much a survival skill as knowing how to change a car tire.

THE GOLDEN RATIO
I always say that every investor should have at least 5-10% of his portfolio in physical precious metals. Of that, the proportion allocated to gold vs. silver depends mainly on risk tolerance. Silver tends to be more volatile than gold, so silver investors must have the discipline not to liquidate their stash at the first sign of a correction.

I generally advise a ratio of 2:1 gold-to-silver in the average portfolio. More aggressive investors can push it to 1.5:1 or beyond.

Year-to-date, silver is up 5 percentage points more than gold, and I expect that trend to continue. It’s important to understand that in this fast-changing world, silver is no longer runner-up.

If you want to find out more about Mr. Schiff and his company, Euro Pacific Precious Metals, (click here).  If you would like to see a recent appearance where the CNBC crowd tried to verbally beat up Mr. Schiff, click on this link:  http://www.youtube.com/watch?v=btCyagaQ3wQ&feature=related   I think Schiff more than held his own while some of the hosts were actually quite rude.

Leave a Reply to Samantha in Tucson Cancel reply