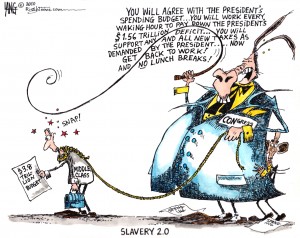 We just finished 2009 with a record federal deficit of $1.4 trillion.  Let’s think about that for a minute.  The U.S. government says it is $1,400 billion in the red at the end of 2009.  But is that the “real” deficit number?  The reason why I ask is the government uses accounting gimmicks to make just about every number it puts out look better than what it really is.  For example, the most recent Consumer Price Index for inflation was officially 2.7%; but if you compute inflation the way Bureau of Labor Statistics did it in 1980, the inflation rate would be 9.7%.  The same goes for unemployment.  Officially, it stands at 10%; but if computed the way BLS did it prior to 1994, it would come out to 21.9%. (source: shadowstats.com)

I asked economist John Williams of shadowstats.com to weigh in on last year’s record $1.4 trillion of red ink for the “real” deficit number.  Williams told me, “It was closer to $2 trillion because they knocked off $500 billion with accounting gimmicks.” Just because the government knocked off a half trillion bucks using an accounting gimmick, doesn’t mean we owe any less. The reduced number just doesn’t look quite as ominous. Another way to state the $2 trillion of red ink from last year is $2,000 billion!  It is a very big number, even for the U.S.

In its latest budget, the White House is projecting $1.56 trillion in red ink, and that is another new record!  What will the “real” deficit be when the year is over?  Williams says, “With a weaker than expected economy, the 2010 deficit likely will top $2 trillion…”  So, according to Williams, the government probably understated the “real” red ink this year by another half trillion bucks.   If this analysis turns out to be correct, then the government will have understated the red ink by at least $1 trillion in the last 2 years alone!

No matter how the government does its accounting, the actual deficit will have to be financed.  America will have 3 choices:  (1) raise taxes to the moon in a very bad economy, (2) get foreigners to buy more debt, and (3) monetize the debt. (print money to pay the bills)  Williams chooses what’s behind door #3.  In his latest report he says, “…worse-than-projected borrowing needs for the U.S. Treasury likely will trigger increasing flight from the U.S. dollar. At such time as that moves to a panicked level, and U.S. Treasuries increasingly are dumped or otherwise shunned, the Fed will have little choice but to monetize the Treasury debt, becoming the buyer of last resort for Treasuries. Those circumstances should lead to mounting inflation woes and flight-to-safety outside the U.S. dollar, particularly to hard assets such as gold and silver…”

There is another possible consequence to record deficits–higher interest rates!  Countries around the globe with high deficits are starting to see interest rates rise.  For example, Greece is facing a huge debt load and interest rates there are skyrocketing.  In a recent article from “Money and Markets,” analyst Mike Larson put it this way, “Imagine what would happen if Uncle Sam’s borrowing costs shot up like they have in Greece — by 60 percent!  Imagine what that would mean for the cost of car loans, mortgages, and other products whose rates track Treasury yields!  And imagine the impact on an economy still struggling to recover from the Great Recession!  This is the next big story that few people are talking about.”

The founder of  “Money and Markets,” Dr. Martin D. Weiss, went on to say, “…unless the Obama administration and Congress can somehow ax the budget or find a new gusher of revenues — both extremely unlikely anytime soon — collapsing U.S. bond prices and sharply higher long-term interest rates are unavoidable.”

The most recent record breaking budget does not take into account what we will spend in the continued bailout of failed mortgage giants Fannie and Freddie.  The two were nationalized last year and, on Christmas Eve, the Treasury decided to give them both unlimited bailout funds for the next three years!   There is a total of  more than $6 trillion in liability. (The Fed bought at least $1.25 trillion of MBS from Fannie nad Freddie.) I guess the folks at the White House Budget Office are going to pretend that commitment doesn’t exist.  Why is  the mainstream media not asking how we are going to pay for the Fannie and Freddie budget buster?

So, it looks like higher inflation or higher interest rates or both are coming.  This will be the consequence of a ballooning deficit and out of control federal spending.  Plan your financial defenses accordingly.