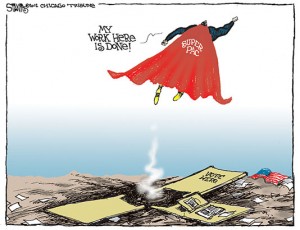 I have long said the main political parties are really just a two-headed monster that take turns ripping off America.  We are not getting discussion on the enormous problems facing the country during the GOP primaries.  We need serious banking reform and criminal prosecutions.  Neither party will touch that issue because the banks contribute to both parties equally.  You cannot grow jobs until you get Wall Street out of politics and stop them from rigging the game so they win and we lose 100% of the time.

I think the election process has also become a rigged game where you get to chose between two people that the big money interests both accept.  Look at Obama and Romney; billionaire investor George Soros said there was “no difference” between the two.  I agree.  Someone like Ron Paul is different, and both Democrat and Republican leaders fear he will bring some real change.  The change will not benefit the powers that be, and I think that is why Dr. Paul gets the short end of the stick when it comes to the corporate controlled media or the mainstream media.  Today, I bring you two videos.  The first one is a spoof on the election process.  The second is a short clip from comedian George Carlin called “The American Dream.”  This prophetic clip is from 2005.   Both would be a lot funnier if they were not so true.  Enjoy.