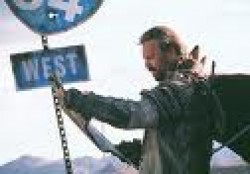 The first clans organized around local police forces. The conservatives’ war on crime during the late 20th century and the Bush/Obama war on terror during the first decade of the 21st century had resulted in the police becoming militarized and unaccountable.

As society broke down, the police became warlords. The state police broke apart, and the officers were subsumed into the local forces of their communities. The newly formed tribes expanded to encompass the relatives and friends of the police.

The dollar had collapsed as world reserve currency in 2012 when the worsening economic depression made it clear to Washington’s creditors that the federal budget deficit was too large to be financed except by the printing of money.

With the dollar’s demise, import prices skyrocketed. As Americans were unable to afford foreign-made goods, the transnational corporations that were producing offshore for US markets were bankrupted, further eroding the government’s revenue base.

The government was forced to print money in order to pay its bills, causing domestic prices to rise rapidly. Faced with hyperinflation, Washington took recourse in terminating Social Security and Medicare and followed up by confiscating the remnants of private pensions. This provided a one-year respite, but with no more resources to confiscate, money creation and hyperinflation resumed.

Organized food deliveries broke down when the government fought hyperinflation with fixed prices and the mandate that all purchases and sales had to be in US paper currency. Unwilling to trade appreciating goods for depreciating paper, goods disappeared from stores.

Washington responded as Lenin had done during the “war communism” period of Soviet history. The government sent troops to confiscate goods for distribution in kind to the population. This was a temporary stop-gap until existing stocks were depleted, as future production was discouraged. Much of the confiscated stocks became the property of the troops who seized the goods.

Goods reappeared in markets under the protection of local warlords. Transactions were conducted in barter and in gold, silver, and copper coins.

Other clans organized around families and individuals who possessed stocks of food, bullion, guns and ammunition. Uneasy alliances formed to balance differences in clan strengths. Betrayals quickly made loyalty a necessary trait for survival.

Large scale food and other production broke down as local militias taxed distribution as goods moved across local territories.  Washington seized domestic oil production and refineries, but much of the government’s gasoline was paid for safe passage across clan territories.

Most of the troops in Washington’s overseas bases were abandoned. As their resource stocks were drawn down, the abandoned soldiers were forced into alliances with those with whom they had been fighting.

Washington found it increasingly difficult to maintain itself. As it lost control over the country, Washington was less able to secure supplies from abroad as tribute from those Washington threatened with nuclear attack. Gradually other nuclear powers realized that the only target in America was Washington.  The more astute saw the writing on the wall and slipped away from the former capital city.

When Rome began her empire, Rome’s currency consisted of gold and silver coinage. Rome was well organized with efficient institutions and the ability to supply troops in the field so that campaigns could continue indefinitely, a monopoly in the world of Rome’s time.

When hubris sent America in pursuit of overseas empire, the venture coincided with the offshoring of American manufacturing, industrial, and professional service jobs and the corresponding erosion of the government’s tax base, with the advent of massive budget and trade deficits, with the erosion of the fiat paper currency’s value, and with America’s dependence on foreign creditors and puppet rulers.

The Roman Empire lasted for centuries. The American one collapsed overnight.

Rome’s corruption became the strength of her enemies, and the Western Empire was overrun.

America’s collapse occurred when government ceased to represent the people and became the instrument of a private oligarchy. Decisions were made in behalf of short-term profits for the few at the expense of unmanageable liabilities for the many. Overwhelmed by liabilities, the government collapsed.

Globalism had run its course. Life reformed on a local basis.

Paul Craig Roberts /span> [email him] was Assistant Secretary of the Treasury during President Reagan’s first term.  He was Associate Editor of the Wall Street Journal.  He has held numerous academic appointments, including the William E. Simon Chair, Center for Strategic and International Studies, Georgetown University, and Senior Research Fellow, Hoover Institution, Stanford University. He was awarded the Legion of Honor by French President Francois Mitterrand. He is the author of Supply-Side Revolution : An Insider’s Account of Policymaking in Washington;  Alienation and the Soviet Economy and Meltdown: Inside the Soviet Economy, and is the co-author with Lawrence M. Stratton of The Tyranny of Good Intentions : How Prosecutors and Bureaucrats Are Trampling the Constitution in the Name of Justice. Click here for Peter Brimelow’s Forbes Magazine interview with Roberts about the recent epidemic of prosecutorial misconduct.