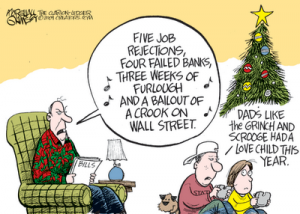 Kenneth Feinberg was appointed by the Obama Administration as a so-called “Pay Czar” after public outrage over big compensation packages at firms that were bailed out by the government.  Feinberg has been on the job as pay cop for a little over 6 months.  He is attempting to cut the salaries of top executives by limiting the cash portion of pay to just $500,000.  The rest of the compensation can be in stock but must be held for 3 years before cashing it in according to Feinberg’s new rules.  Also, fringe benefits such as using the private jet are capped at $25,000.  What happens after that?  Will executives be forced to spend some of their half million dollar salaries to fly first class?

Is this supposed to be some sort of punishment for taking such insane risks that companies, mostly banks, needed a government bailout to stay in business?  This is really not a pay restriction at all but simply a delayed compensation scheme.  A Bloomberg article on the topic last month said, “Marc Poerio, a lawyer who tracks compensation issues in Washington says proposed rules will better link rewards with behavior that creates long- term success and stability. The restrictions won’t cut pay overall, says Poerio, who advises financial companies. “I would be shocked to see reductions,” (click here for the full Bloomberg story)

Pay restrictions are the reason why companies are racing to pay back TARP bailout money.  Bank of America dodged pay restrictions because it paid back its TARP money last week.  Coincidently, it was just in time to approve big paydays for top executives for 2009.  In a completely separate transaction, I suspect the Federal Reserve took toxic assets off the B of A books just like it did with Citibank.  $230 billion in liability for toxic assets was transferred off Citi’s books compliments of the Fed.  How much money in toxic assets did B of A dump on the Fed and taxpayers?  That is a tightly held secret that taxpayers do not get to know.  By the way, Citibank also wants to pay back its $45 billion in TARP bailout money and walk away scot-free.

To me this “Pay Czar” idea is just a smoke screen to calm an angry public that is facing increasing job losses.  The unemployment rate now officially tops 10 percent.  Unofficially, the unemployment rate is more than 21 percent according to Shadow Government Statistics.  SGS says it will be going much, much higher in the months to come.  Mr. Feinberg simply limiting the cash payment to executives that had a hand in bankrupting their companies is a crock and a sham.  These folks should be fired!  To my knowledge, not a single banker has been canned for causing the biggest financial meltdown of all time.  I have an idea!  If you want to really punish some reckless executives, you should make them live on 4 or 5 hundred dollars a week just like the millions of unemployed are doing right now.