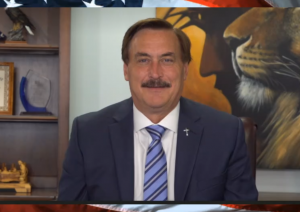 My Pillow CEO Mike Lindell has spent $17 million of his own money documenting and uncovering what he calls nationwide election fraud that happened in the November 3, 2020 election. This does not count all the money he has lost being kicked out of national chains selling his products. Lindell says, “I don’t care how much money it costs because if we don’t get the election fraud stopped, I won’t have a business anyway.” In Lindell’s ongoing attempt to shine a light on the fraud is his upcoming “Cyber Symposium.” There’s a lot on the line, and Lindell explains, “This has been the biggest cover-up in history for the biggest crime ever. How did they disguise it? Let’s just look at Wisconsin and Michigan. All those mail-in votes went to Biden. That’s a lie. The mail-in votes were counted on the morning of the 3rd. They were the first votes counted. . . . In Pennsylvania . . . they added 700,000 to the mail-in votes. We checked with the U.S. Post office over there, and none of them went through the Post Office. They were able to manipulate all this with the machines and the computers. We are going to show all of that. It’s a miracle that they got this to me. We have all the data, and not just some. I have done this for months going over all this with lawyers and cyber experts.”

Lindell goes on to say, “Some of the biggest cyber-attacks came in California, Washington State and Oregon. . . . Everyone says they are solid blue, they are solid blue. No, that’s not true. There are massive votes there that you can just flip, and you can make it look like Biden won by such a huge amount, then why even bother to audit. There is no way they cheated by 6 million votes. Yes, they did because you can use machines. The real totals are going to come in, and its 80 million votes for Trump to around 68 million for Biden. The cheating was in every state. . . . The media, who attacks me every day, is going to go away. They should just start doing journalism again. This is the biggest story in the world. We have been attacked by a foreign country—China. Even my Democrat friends say there is something wrong, and this is not what they voted for. . . . There were domestic people helping them. . . . There were bad actors here helping China. They did not do this alone. You need to melt these machines down and turn them into prison bars because we are going to need to put a lot of people behind bars. These are traitors and people who committed treason who helped China attack our country.”

Lindell, who was a long time FOX News favorite, found out recently FOX would not allow advertising to promote his Cyber Symposium. Lindell now says, “Shame on FOX. . . . FOX was the only station that denied advertising for the Cyber Symposium next week. I’ve got to be one of their biggest advertisers, and they denied this ad. It’s just a directional ad to the symposium for everyone to watch it on FrankSpeech.com on the 10th, 11th and 12th of August, and they denied that. I have pulled all my ads from My Pillow. I am done with them. This is $50 million in ads per year. . . . Fox is destroying our country by keeping silent. It’s going to cost My Pillow maybe $1 million a week in sales. . . . I said that they should become a weather channel, but I have changed my mind because I would not trust them to report an oncoming storm. I would not trust them to report the news. So, shame on FOX, they are worse than any other channel.”

In closing, Lindell says, “The big lie is ‘The Big Lie.’ Everyone needs to tell everyone to watch this and tune into FrankSpeech.com next week.

Join Greg Hunter as he goes One-on-One with Mike Lindell.

(Greg Hunter and USAWatchdog.com get $0 compensation from Lindell or MyPillow.com. Some of the money from sales, no doubt, goes to continue the election fraud exposure hosted on Lindell’s social media platform called FrankSpeech.com. Lindell is funding all of this effort out of his own pocket, which now stands at $17 million for Lindell to fight the election fraud from November of 2020.)