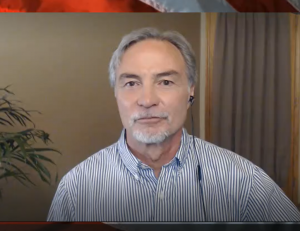 Financial writer John Rubino says, “2021 is going to be a pivotal year” in the debt markets.  Rubino says lots of debt will either be bailed out or defaulted on in some way.  Because of CV19, there is no getting around this.  The debt clock has been pushed forward by years.  One too huge to hide debt problem are heavily indebted U.S. states and cities.  Rubino says, “You have to call this a scam because years ago, they decided to offer wildly over generous pensions to public sector unions.  In return for that, the public sector unions elected people who would keep on doing that and keep the gravy train going. . . . Back then, it worked . . . but now they are all retiring, and these states and cities are heading for some version of bankruptcy at an accelerated rate.  It was always going to happen in the next 10 years, but with the pandemic, the time frame has been moved way up.  So, probably 2021 will be a year where a lot of these guys hit a wall where they have no choice but to default on a lot of their obligations.  That’s going to throw the financial system into turmoil.”

Rubino points out, “If they can’t pay their bills, they can’t pay their bills.  If it can’t happen, it won’t happen.  So, you get effective bankruptcy via defaults for a lot of these places.  That means massive layoffs of city and state workers and turmoil in the bond market.  That kind of thing alone is enough to send the U.S. back into recession assuming we are out of recession when it happens.  If you combine this with all the other stuff that will be going on, it is going to be one of those perfect storm scenarios where everywhere you look, somebody is in trouble and demanding a federal bailout. . . . The federal government has a printing press.  They can bail out Illinois mismanagement and Chicago mismanagement and basically bail out the politicians who did all of these things.  This will come at the cost of the financial markets in general and the currency markets in particular.  When they see trillions of dollars in bailouts here and trillions of bailouts there, they will conclude maybe you don’t want to hold the currency of the country that is doing this.  Then the U.S. starts looking a lot like Illinois does now, not AAA credit and that is when the debt spiral starts.  This causes people to lose faith in the currency, and then it’s game over. . . . There are mass layoffs coming one way or another.  It’s just a question of who gets laid off.”

Rubino also says, “A lot of these cities and states are pinning their hopes on a bailout because they can’t fix things themselves.  They have screwed things up to a point to say there is no local fix that is feasible.  So, they are hoping the Fed creates $3 trillion or $4 trillion new dollars and just hands it to them. . . . There are no winners in any of this.  There are people who lose less badly than others. . . . You can drive yourself crazy talking about the horrible things that are going to happen as we run out of money as things stop working. . . . One of the things that will happen is there will be civil unrest, and there will be slower and slower police response time.  The world will get very threatening at some point. . . . There is no good way out of this.  Everything is a choice of types of pain.  That’s all we have left.  Do you want this kind of a crisis or that kind of a crisis?”

Join Greg Hunter as he goes One-on-One with John Rubino, founder of the popular website DollarCollapse.com.

There is much free information on DollarCollapse.com. If you want personalized contact with John Rubino, and get his latest articles delivered directly to your inbox, you can sign up for his subscription service (also FREE) by clicking here. Rubino tells me he does not sell his email list.