Home
»
Market Analysis
»
B of A Settlement, Another Taxpayer Rip-off 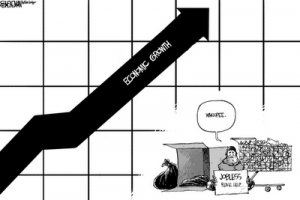 In case you have not heard, Fannie and Freddie (also known as Government-Sponsored Enterprises or GSE’s) settled a big lawsuit with Bank of America Monday.  The case was settled for cents on the dollar, even though the GSE’s had had a strong case to force B of A to buy back billions in sour mortgage-backed securities (MBS.)   I wrote about some of this in a December 1 post called “Foreclosure Bombshell.”  The post was about some of the legal trouble Bank of America was having with the mortgage debacle and the possibility of the banks being forced to buy back billions in sour MBS.  Here’s part of what I wrote back then, “Mortgage-backed securities have to meet what is called “contractual representation and warranties.”  That basically means the MBS are required to be free of fraud and be exactly what the seller says they are.  Do you think mortgage-backed securities are free of fraud?  Do you think these securities are the triple-A rated risk free investment the big Wall Street banks claim?—NO WAY!  The banks are going to be forced to buy back all the toxic mortgage junk they sold.   (Click here to read the entire post.)

On Monday, after news of the Fannie and Freddie settlement, I got a gloating comment from a reader named “Rick.”  Rick tells me he’s retired from the “finance industry.”  Here’s some of what he wrote, “I told this would be nowhere as bad as most made out. Hope you read about the settlement with the GSE’s With BofA, 1.3b, this makes BofA total exposure probably around 3b going forward, not the 50B+, everyone thought. Additionally, B of A audit by Moody’s and others has been complete and found that Loan doc’s were delivered. PIMCO will settle for very little in the coming weeks and AG’s to follow. NO Conspiracy and Fraud as you have promoted on your blogs, just very bad process. As stated in our last exchange, I hope you man up and write a new blog retracted and admitting you got a little carried away with you statements. This is what happens when you repeat from others and do not do your own homework.  Just remember the fraud was committed buy the rating agencies not the Banks.”  (You can read the entire exchange at the end of the Foreclosure Bombshell post.)

I’ll “man up”alright.  Yes, Rick you were right, the American taxpayer got ripped-off once again.  It was not that bad for B of A because it is another back door bailout for the banks that caused the mortgage mess in the first place.  The headline over at Fortune/ CNNMoney.com says it all “Is Fannie bailing out the banks?”  Of course, the answer is YES!  The report goes on to say, “Monday’s arrangement, according to this view, will keep the banks standing — but leave taxpayers on the hook for an even bigger tab should a weak economic recovery falter. Sound familiar?  ‘The administration is trying to weave a path between two bad alternatives,’ said Edward Pinto, a resident scholar at the American Enterprise Institute. “They want to bail out the big banks without doing apparent damage’ to the sagging U.S. budget position.”  (Click here to read the entire Fortune/CNN report.)

This is an outrage, especially when you consider what kind of a sweet deal B of A got.  Investing expert and owner of a blog called The Big Picture, Barry Ritholtz framed the B of A settlement this way, “Bank of America settled numerous claims with Fannie Mae for an astonishingly cheap rate, according to a Bloomberg report.  A premium of $1.28 billion was paid to Freddie Mac to resolve $1 billion in claims currently outstanding. But the kicker is that the deal also covers potential future claims on $127 billion in loans sold by Countrywide through 2008. That amounts to 1 cent on the dollar to Freddie Mac.  Imagine if you had a $500,000 mortgage, and you got to settle it for $5,000 — that is the deal B of A appears to have gotten from Freddie Mac.”  Click here for the complete Ritholtz post.)

Maxine Waters, a senior Democrat on the House Financial Services Committee, also thinks taxpayers got a bad deal.  The Congresswoman’s statement was included in a story from the Businessinsider.com.  Representative Waters said, “. . . I’m fearful that this settlement may have been both premature and a giveaway.  The fact that Bank of America’s stock surged after this deal was announced only serves to fuel my suspicion that this settlement was merely a slap on the wrist that sets a bad example for other negotiations in the future.  I understand that the questions raised by fraudulent servicing practices were not addressed in these settlements, and I hope that Fannie Mae and Freddie Mac, along with their conservator, are more aggressive in pursuing banks for the fraud I documented in my Subcommittee during the last Congress.”  (Click here for the complete Business Insider post.) The sad thing here is I don’t think this administration or any Republican administration will pursue the “fraud” Congresswoman Waters has documented.  I envision every other major Wall Street bank that dumped its toxic mortgage-backed securities onto the GSE’s to also get a sweet deal at the taxpayers’ expense.  Many more billions will be poured into the banks to prop them up when some are clearly engaged in malfeasance.  Former bank regulator and professor of economics William Black has called for banks such as B of A to be dismantled in receivership.  He co-wrote a piece last October called “Foreclose on the Foreclosure Fraudsters,” but what is happening here is just the opposite.  Once again, incompetence and alleged crime is being rewarded.   (Click here to read the William Black article.)

My only question is how long can the bailouts and spending go on?  The banks will no doubt get another round of bailouts via the GSE’s, costing hundreds of billions of new dollars.   In his most recent post, Jim Willie of Goldenjackass.com sums up the end result of the massive and ongoing bank bailouts in one chilling sentence.  Willie writes, “The extraordinary efforts and attempts to save the big US banks will be the precise policy that leads to systemic failure and the US Treasury Bond default, all in time.”  (Click here for the complete Willie post.)

Meanwhile, the Fed continues QE2 at a rate of $75 billion a month of pure money printing to finance the country.   When QE2 is finished in June of 2011, how difficult will it be to get foreigners to buy our debt?  QE3 anyone?  I have a novel idea–the U.S will once again raise its debt ceiling. (Currently it stands at $14.3 trillion.)  That will be painless for the politicians, and besides, nobody goes bust or gets punished in America anymore.   We do not have leadership in this country; we have political hacks taking turns protecting their donors and cashing in—at the expense of the American people.