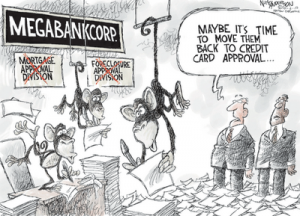 What a week for real estate!  The mortgage document fraud investigation kicked into high gear with all 50 state attorneys general opening investigations.  There are calls for criminal investigations, and trial attorneys smell blood over allegations of fraud many say will be easy to prove.  On top of that, many investors and pension funds are getting ready to sue the big banks over big losses.  Allegations include everything from sloppy record keeping to fraudulent mortgage backed securities.  The problem is sure to cost trillions for the big banks who might be forced to buy back the crooked securities they sold.  What a mess!  Think you won’t be affected?–think again.  Before it is over, the whole country will be changed, and for many, life will be much harder to live.  Published author, James Howard Kunstler, gives his overview on how we got into this monster of a mess and how most in government did not even notice the huge problems until recently.  His view of the future is bleak, but it is said “to be forewarned is to be forearmed.”   Enjoy the post below written this week by Mr. Kunstler.  –Greg Hunter–

The banking authorities were shocked – shocked – to discover last week that an awful lot of mortgage paper in this country is not quite in order… appears to contain, er, irregularities… seems less than kosher… frankly, exudes an odor like unto dead carp or, shall we say, a heap of dead carp the size of the building at 3900 Wisconsin Avenue, N.W., Washington, D.C. Any day now we will hear that… mistakes… were… made.

Is it indelicate to say that the USA as an enterprise has its head so deeply and firmly up its ass that the all the proctologists alive on planet Earth could not extract the collective cranium from the collective cloacal chamber even with the aid of a Bucyrus-Erie 1060-WX bucket-wheel excavator? Like, where were we the past ten years? Surely not everybody in the nation was doing bong hits while playing Grand Theft Auto, or watching The Real Housewives of New Jersey, or downing tequila shots and Percocets in the parking lot of the Talladega Superspeedway, or cooking meth in the family room, or whacking it to Internet porn, or searching for “excitement” in one of America’s 450 commercial gambling casinos.

Did nobody, for instance at Fannie Mae or Freddie Mac, review any of the paperwork fluttering in from places like Countrywide or Ditech and scores of other boiler rooms where mortgages were hatched like Peking ducklings?  There was an awful lot of it, I’m sure, but aren’t there a lot of seat-warmers at Fannie and Freddie who collect their salaries for the express purpose of reading mortgage documents? Was nobody the least bit suspicious about the mysterious flurry of “restaurant employees” and “lawn-care technicians” buying million-dollar condominiums with no money down at terms that would make a three-card monte dealer weep with laughter? After all, they had to sort and bundle all these contracts for the likes of Goldman Sachs and JP Morgan and Citibank – the list isn’t that long, but you get the picture….

And speaking of these august institutions, didn’t anybody in the divisions charged with assembling complex securities composed of mortgages, or composed of bets against bundles of mortgages, or composed of some notion of something dimly related to a rumor of mortgage lending – didn’t any of these expensively-educated chaps or lasses pause a moment in their aardvark-like labors of bonus-seeking to withdraw their snouts from the moist ground where swindles pupate and at least goggle in self-admiration at the fantastic legal novelty of their endeavors.

And what of the numberless agencies, federal on down, starting with, say, the Office of Thrift Supervision, or the Comptroller of the Currency, or the Federal Deposit Insurance Corporation, or the Board of Governors of the Federal Reserve, or the chairpersons of a dozen senate and house subcommittees on matters related to finance, or the various inspectors general from sea to shining sea or the attorneys general of all fifty states plus the US Department of Justice, or the countless fiduciary officers of the pension funds who tripped over each other buying all the tainted paper churned out like so much Purina Rat Chow – or, for Godsake, a lonely loan officer here or there with something resembling a conscience?

Nobody in the USA noticed anything the least bit fishy. And now all that epic rot has eaten through the last hanging tendrils of the banking system. And the whole shootin’ match is fixing to seize up and blow like a Chevy Big Block Super Stroker 632 engine that some clown has poured karo syrup into.

But, sadly, I can only return to the trope of cranial rectosis. And when your head is in such a dark place, it’s hard to see the truth, let alone tell something you can’t even see. And sadly too, the truth is that this ghastly mortgage fiasco was a fraud that the whole nation perpetrated on itself in a tragic rush to get something for nothing. Since the failure of authority is complete, it’s now up to nature to act as the arresting officer. She’s a harsh mistress. She’s going to kick our ass.

I’m sorry, but I don’t see anyway out of this. With fraud absolutely everywhere in our banking system, like some advanced metastatic cancer, financial metabolism comes to a sickening stop. Nobody can buy or sell property. Nobody can trust any American financial institution. Money can’t circulate. Nobody will be able to get any money. It won’t be long before that translates into nobody getting any food. We may be a nation of clowns, but as Lon Chaney famously observed a while ago – when explaining his technique of horror movie-making – “…there’s nothing funny about a clown in the moonlight….”

The sequel to Mr. Kunstler’s 2008 novel of post-oil America, World Made By Hand,is available now.  His next book “The Witch of Hebron” is coming out soon.    Order via AMAZON.