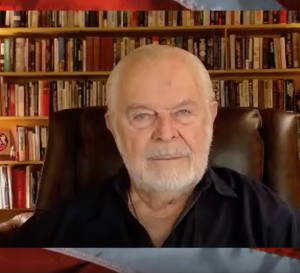 Edward Griffin, author of the wildly popular book about the Federal Reserve “The Creature from Jekyll Island,” is holding a conference this weekend called “Red Pill Expo.” It is all about waking people up from the illusions they are being told. Griffin explains, “The illusions are in health, in politics and in education. The illusions are in the media, in money and in banking, which is my specialty. So, people are coming, some of whom are informed, but most respond to the slogan we are using for the “Red Pill Expo,” and the slogan is ‘Because you know something is wrong.’ That sort of spells it out for most people, not just in America, but for people all over the world. People everywhere are being fed propaganda, lies and false stimuli of all kinds, but deep in their hearts, deep in their instincts, they know something is wrong.”

What’s wrong in the financial world with the longest expansion in history and the Fed starting QE (money printing) again? Griffin says, “We are living in a system of the banks, by the banks and for the banks, and that is the reality. . . . They see that the wheels are coming off. . . . The system of inflation in which we live cannot go on forever. . . . All systems of exponential growth always collapse. They come to an end at some point, and it’s hard to tell exactly at what point, but you do know there is a breaking point where it just moves beyond reality. The banks know this better than anybody. So, I am assuming that they feel they are at the end. You can smell it. You can see it. You can touch it almost. So, what do you do? . . . I think their thinking is, hey, we are at the end and let’s just grab all we can so when the system collapses, we will be okay. That is kind of a crude way of putting it, but I think they are going for broke because they know it is broke, and there is not much they can do about it.”

So, what’s the plan by the bankers? Griffin says, “I think I know. They are waiting for the big collapse to come. They will personally be okay because they will have amassed hard assets. They are trying to hold all the gold, all the silver, all the real estate and all the stuff that has value. They want all the tools, factories and food supplies, but everything else, based on numbers, paper and debt, that will collapse. So, they will be able to pick up everything for pennies on the dollar.”

What does the little guy do? G. Edward Griffin says simply, “Hold hard assets.” Griffin also says, “This question usually comes in the form of what does the average guy do? . . . The answer is if you want to do something, stop being average. You’ve got to climb up out of that level. You have to become un-average. You have to start asking questions, and stand up and take it on the chin now and again. You’ve got to get into the fray. Join the battle. Speak up and join with others with like minds, and start becoming active in the political arena.”

Join Greg Hunter as he goes One-on-One with G. Edward Griffin, author of “The Creature from Jekyll Island” and founder of the upcoming “Red Pill Expo.”

(To Donate to USAWatchdog.com Click Here) (This video was demonetized–once again.)

To find out all about the “Red Pill Expo,” go to RedPillExpo.org. There is still room at the conference, and there is also live streaming which you can enjoy from home. To buy a copy of the book “The Creature from Jekyll Island,” click here.