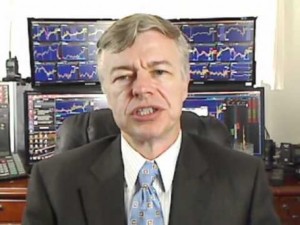 Analyst Karl Denninger says, “The best thing we could do as an economy is go straight off the fiscal cliff and not come back because that would take about half of the deficit off the table immediately.”  The reason why the U.S. deficit is so large, according to Denninger, “Both sides want to spend more than they take in in taxes.”  Denninger says the Federal Reserve enables the U.S. to live well beyond its means.  Denninger contends, “The $85 billion a month the Fed is putting into the system enables deficits and spending. . . . When you debase the currency in this fashion, there is no free lunch.”   One thing that needs to be fixed is the Alternative Minimum Tax (AMT).  Denninger says, “It is going to hammer tens of millions of middle class families that have never had to pay it before.”  Instead of a tax refund, some middle class families might owe a few thousand dollars in 2013.  The AMT might get a patch, but Denninger thinks, “There will be no deal on the Fiscal Cliff by January 1st.”  Join Greg Hunter as he goes One-on-One with Karl Denninger of Market-Ticker.org.