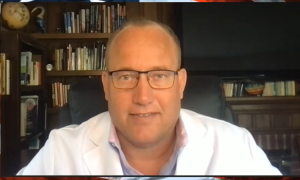 Dr. Pierre Kory is a world renowned critical care and pulmonary expert in treating Covid-19.  He says nothing is being done to save people from dying long before they get bad enough to go to the hospital for treatment.  Dr. Kory, who is a co-founder of the Front Line Covid-19 Critical Care (FLCCC) Alliance, explains, “The suppression of early treatment in this country is one of the most historically calamitous actions, and history will not be kind here . . . .Right now, the NIH (National Institutes of Health), besides monoclonal antibody treatment, they advise nothing in early treatment and nothing in prevention.  They say don’t use anything to prevent this, not even vitamin D that we know is protective, and not even drugs like Ivermectin, Hydroxychloroquine (HCQ) or any of the other drugs that have shown the ability to lessen transmission.  They say stay home and wait for you to turn blue, and then come to the hospital.  This is absurd, and the people who are dying for lack of early treatment, both vaccinated and unvaccinated, 75% to 80% of people going to the hospital do not need to go if they have been given early treatment.”

If you do go to the hospital for treatment, don’t expect to get aggressive treatment, according to Dr. Kory.  He contends, “You do need good and aggressive treatment around this disease. . . . I find there is an epidemic of under-treatment in the hospital.  I am an intensive care specialist, and the doctors I talk to are on this anemic NIH protocol, which is Remdesivir, which is ‘death is near.’  That’s a ridiculous drug.  It has shown no efficacy in numerous trials, except for the pharmaceutical sponsored ones.  It’s used late in the disease as an anti-viral, and that makes no sense. . . . The hospital protocols are just not aggressive enough.  So, for me, the key is avoiding hospitalization.  Treat early and treat aggressive.  You don’t want to fall behind this disease.  If you do go to the hospital, almost all hospitals in the land . . . are using this anemic protocol, which I say helps the few, but fails the many.”

The good news is there are treatments including, but not limited to, Ivermectin, HCQ, Vitamin D, zinc and many others, that if used early and aggressively will most likely cure patients of CV-19 the vast majority of time.  Dr. Kory says, “It does not matter if you are vaxed or unvaxed.”

Dr. Kory tells people to go to the FLCCC Alliance website and get any and all information for treating Covid-19 for free.

Join Greg Hunter as he goes One-on-One with Dr. Pierre Kory, one of the top Pulmonary and Critical Care experts on the planet, who is co-founder of the Front Line Covid-19 Critical Care Alliance.  (There is much more in the nearly 44 min. interview)

Dr. Kory says history will also not be kind to Dr Fauci.  Dr. Kory contends Dr. Fauci made nearly every decision in favor of Big Pharma and not the public.