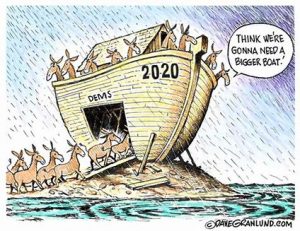 The Supreme Court ruled that the 2020 census cannot include a simple question that asks if you are an American citizen. Chief Justice John Roberts was the tie breaker that voted in favor of banning the question. Roberts is the Judge who gave America Obamacare, and he is now giving non-citizens cover to deliver populations to Blue states that guarantee more House seats. Trump calls the Supreme Court decision “ridiculous.”

20 Democratic challengers are slugging it out to become the nominee to face Donald Trump for the White House in 2020. Almost all are touting free stuff and socialism to voters. Most are for free health insurance for all, open borders, abolishing ICE, letting felons vote, free money, taking away your guns, taking away free speech and increasing taxes to pay for it all. It seems most Democrats are seeing who can come up the craziest, most destructive ideas to capture the nomination.

Renowned radio host and alien expert Steve Quayle will be the guest for the Early Sunday Release.