Home
»
Market Analysis
»
Could Foreclosure Fraud Cause Another Banking Meltdown? 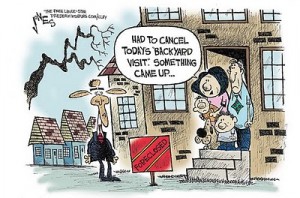 This weekend, Bank of America became the latest lender to delay all foreclosures in 23 states because of possible problems with the necessary documents needed to repossess a home.  GMAC Mortgage and JP Morgan Chase have had similar problems recently with documents that prove the bank has the right to foreclose.   ADINews.com posted a statement from B of A, “We have been assessing our existing processes. To be certain affidavits have followed the correct procedures, Bank of America will delay the process in order to amend all affidavits in foreclosure cases that have not yet gone to judgment in the 23 states where courts have jurisdiction over foreclosures,” BofA spokesman Dan Frahm said in a statement.”  (Click here for the entire ADINews.com story.)

Florida Congressman Alan Grayson says the foreclosure document “problem” is really fraud on a massive scale.  He calls what is happening now a “foreclosure fraud crisis” that could affect 60 million properties in the U.S.  It is all because the banks have lost track of promissory notes signed by the homeowners.  I was the first mainstream media reporter to do a story on this problem in 2008.  (Click here for the 2008 “Produce the Note” story from CNN.)    Back then, some big banks could not “produce the note” that proved it had the right to take back a home.  The problem has gotten much bigger as more homeowners discover the banks do not have the original documents.

After physical paperwork was filled out and signed by the borrower, the banks electronically filed the paperwork into a computerized system called the “Mortgage Electronic Registry System” (MERS).   According to Congressman Grayson, 60%, or 60 million, mortgages are in MERS.  The banks lost track of the original paperwork, the note, signed by the borrower.  That is what actually proves the bank owns the property.  Grayson says, “It appears that on a widespread and probably pervasive basis they (the banks) did not take the steps necessary to own the note . . . which means that in 45 out of the 50 states they lack the legal right to foreclose. . . .  So they have simply created a system where servicers hire foreclosure mill law firms whose business is to forge documents showing or purporting to show they have a legal right to foreclose.”  (Click here for the entire Congressman Grayson video statement from 9/30/10.)

Please take a moment and grasp the enormity of this problem for the banks.  There are 60 million homes which banks loaned money on, and now they might not be able to legally get the property back if the homeowner defaults!  Another colossal problem for the banks is the trillions of dollars in mortgages bundled into securities.  Remember, the banks were giving anyone who could fog a mirror a mortgage which allowed them to create and sell lucrative mortgage backed securities.  So, there are trillions of dollars in mortgage backed securities that now could have NO backing!   Would you like to be the pension fund manager who bought that security?  Do you think this just might cause an accounting problem for the banks?  Do you think this could push some of the big banks into bankruptcy?  Will there be another financial meltdown and government rescue?

Now, more scrutiny about the foreclosure process is hitting the banks from state Attorneys General. California AG, Jerry Brown, is demanding JP Morgan Chase show foreclosures in his state are following the law.  (California is not one of the 23 states where the banks have stopped the foreclosures.)  Illinois AG, Lisa Madigan, has demanded to set a meeting with JP Morgan Chase and Ally Financial to look into foreclosure practices in her state.  The Connecticut AG, Richard Blumenthal, is demanding a 60-day foreclosure moratorium for all mortgage servicers.  The foreclosure fraud debacle is also getting the attention of Washington, D.C.  Arizona Congresswoman Gabrielle Giffords called for an immediate 90 day moratorium on foreclosures in her state.  Now, there is talk of federal investigations into the alleged foreclosure fraud fiasco.

Zerohedge.com boldly made this prediction and assessment last week, “We predict that within a week, all banks will halt every foreclosure currently in process. Within a month, all foreclosures executed within the past 2-3 years will be retried, and millions of existing home sales will be put in jeopardy.  And like that, mortgage fraud goes global.” (Click here to go to zerohedge.com)

I predict that the deeper federal and state authorities dig into foreclosure fraud, the worse the big banks will look.  So, could foreclosure fraud cause another banking meltdown?  We are going to find out–and soon.