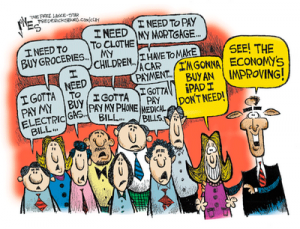 Gold hit an all-time high this week—again.  The yellow metal briefly topped $1,500 an ounce before falling back down a few dollars.  The world has become increasingly nervous about the size of the growing U.S. debt.  Just this week, America’s debt topped $14.3 trillion (also an all-time high) which is close to the limit Congress can legally borrow.A recent CNSNews.com report shows why the $38 billion, that was just cut, is a drop in the budgetary bucket.  The report said, “Friday’s $34.54-billion jump in the national debt almost equaled the $38.5 billion the Republican House leadership said would be cut from spending for the remainder of this fiscal year by the continuing resolution that the Congress passed on Thursday and President Obama signed Friday.  The federal government is now perilously close to hitting its legal limit on debt.”  (Click here for the complete CNSNews.com story.) Odds are the debt ceiling will be raised by more than $1 trillion.  Meanwhile, the Fed is printing more than $75 billion a month to finance 70% of the U.S. budget.  The math of this screams currency crisis 2011!

Even key members of the Fed are openly worried about America’s sea of red ink.  A few weeks ago, Dallas Federal Reserve Bank President Richard Fisher said, “If we continue down on the path on which the fiscal authorities put us, we will become insolvent, the question is when . . . I look at this as a tipping point.” (Click here to read the complete story from CNBC.) Mr. Fisher said we are just at the beginning of correcting our budget problems and “it’s going to be very painful.” What do you bet “painful” will mean forced budget cuts and high inflation.

The warning signs over the past few weeks are monumental.  The world’s largest bond fund, PIMCO, recently sold ALL of its U.S. Treasury bills.  The Chairman of the Joint Chiefs of Staff, Admiral Mike Mullen, has said many times, “I believe that our debt is the greatest threat to our national security.” And just this week, Standard and Poor’s threatened to cut the U.S credit rating if legislators can’t agree on meaningful ways to reduce the deficit.  There is no wonder why investors are converting dollars to gold and silver around the planet.  The University of Texas Investment Management Co. recently announced it bought almost $1 billion in gold bullion.  According to a Bloomberg story this week, “The decision to turn the fund’s investment into gold bars was influenced by Kyle Bass, a Dallas hedge fund manager and member of the endowment’s board . . . ‘Central banks are printing more money than they ever have, so what’s the value of money in terms of purchases of goods and services,’ Bass said yesterday in a telephone interview. “I look at gold as just another currency that they can’t print any more of.” (Click here to read the complete Bloomberg story.)

In a recent report, economist John Williams of Shadowstats.com contends a declining U.S. currency is reflected in spiking gas prices.  Williams’ said, “. . . the primary problem behind higher oil and gasoline prices is the Fed’s efforts at dollar debasement, but few in the media are willing to blame the Fed . . . Also hitting the dollar, though, are increasing instabilities in and ineffectiveness of political Washington, D.C., as viewed by the rest of the world.”

Rising precious metal prices are signaling impending doom for the U.S. dollar.  Please keep in mind, $7 trillion is held outside the country by foreigners.  A sudden sell-off could spell ruin in the form of high inflation (if not hyper-inflation) for most Americans.  All the warning signs are flashing a coming currency crisis—the only question is when?  I’m betting the crisis starts by the end of this year – 2011.