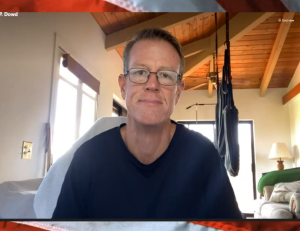 Wall Street money manager Edward Dowd has made billions of dollars for companies such as Black Rock picking good businesses with good products.  He can also spot a fraud, and Dowd says Pfizer simply made up the research that said it’s CV19 vaccine was safe and effective.  According to Dowd, it was neither safe or effective.  Dowd says, “The data was garbage.  As far as I am concerned, they made up the data.  It was garbage.”  Dowd thinks the CV19 injections will be the deadliest fraud in history.  Dowd explains, “This is something we have never seen in the history of our country and the history of the world for that matter.  We have a product (CV19 Vax) that is so fraudulent and so deadly from an acute basis and kills you right away, but the long-term implications of this health impact we don’t know yet.  It’s looking grim.  This is going to be with us for decades.  This is going to change the face of the world.  We have to try to control the outcome because people are going to try to take advantage of this and spin it and turn it into the ‘great reset.’  We are not going to allow the ‘great reset’ to happen.  If it happens, it’s going to happen under our power, and we are going to take control and not some nameless elites that say I am going to own nothing and eat bugs.”

Some people say the perpetrators of the deadly vax fraud are going to get away with it.  Dowd says not a chance and explains, “The problem with this fraud is it is a bridge too far.  220 million Americans took the vax (at least one shot).  Three million Americans are disabled, and it’s probably higher, and those disabilities are going to continue to grow.  The economic impact, the young working age men and women dying in their families and the psychological effects show this is not your run of the mill financial fraud.  This is a different kind of fraud, and this is a trust issue.  It violated trust on so many levels that the politicians are going to turn on these people at some point. . . . These things don’t end until the elite pay a personal price, and that’s where we are headed.  Some of these people are going to pay a very personal price.  I don’t wish that on them, and this is why they need to come forward and start whistleblowing so they can be protected in jails.  These crimes are so difficult to hide that there will be that kind of action.  If you look at the story of Marie Antoinette and the saying “Let them eat cake,” the French Revolution did not end well for the elites.   The consciousness is rising in this country at an alarming fast rate. . . .”

How does Dowd know we have passed an inflection point?  Dowd says, “In October, November and December of last year, people all over the media, celebrities and people I knew were saying the unvaccinated are the problem and they need to be put in camps.  Well, that chatter has disappeared.  They have not apologized for that, but doubts are starting to enter people’s minds. . . . It’s like the stages of grief.  The first one is denial, then anger, then depression and then acceptance.  We are in the denial/anger stage.  We are still in the denial part, but we are quickly approaching anger.”

In the economy and what’s coming, Dowd points out, “What’s going on is we are basically at the end of the super bubble. . . . We are going to have to have a new economic system . . . and what’s going on is the collapse of that.  The defaults are coming, and they are going to start in other countries first and make their way here. . . .It’s going to be a disaster, and we are going to see a huge amount of defaults, bankruptcies and collapse of the economy. . . .99.9% of the world does not know the social contract has been broken.  What does that mean?  It means all the entitlements, social security, the pensions, and there are a lot in Europe, they are gone.  They are not going to get paid.  That’s the bottom line.”

There is much more in the 50 min. interview.

Join Greg Hunter of USAWatchdog.com as he as he goes One-on-One with money manager and investment expert Edward Dowd for 6.7.22.