Home
»
Political Analysis
»
Damage that Could Last for Decades 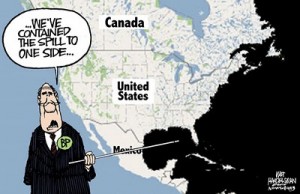 President Obama finally took ownership of the oil gusher in the Gulf yesterday.  A National Commission on the BP oil spill has been formed by the White House and will be headed by former Senator Bob Graham of Florida and former EPA Administrator Bill Reilly.   In prepared remarks, the President said the ongoing calamity off the coast of Louisiana, “. . .is now the greatest environmental disaster of its kind in our history.  Their job, along with the other members of the commission, will be to thoroughly examine the spill and its causes, so that we never face such a catastrophe again.”  (Click here for the complete remarks from the President.)

There is no telling when the mile deep broken well will be capped.  The “top-kill” method failed that was tried over the Memorial Day weekend.   Now, it looks like the well might not be brought under control until August.  Meanwhile, U.S. Attorney General Eric Holder has launched criminal and civil probes into the spewing oil leak in the Gulf of Mexico.  The AG said, “If we find evidence of illegal behavior, we will be forceful in our response,” Holder said. “We have already instructed all relevant parties to preserve any documents that may shed light on the facts surrounding this disaster. As our review expands in the days ahead, we will be meticulous, we will be comprehensive, and we will be aggressive. We will not rest until justice is done.”  (Click here for the complete Holder story.)

The spill is already the biggest in U.S. history.  Now, the only question is how big will it get?  Government estimates say there could be as much as 43 million gallons of oil already spilled into the Gulf.  Private estimates are much higher; and, remember, oil could belch out of the broken well until August.  I talked about that in a recent post called “Freeze BP’s Assets Now.”

If this catastrophe is the biggest, it will undoubtedly be the most expensive in terms of cleanup and damages.  On CNBC yesterday, they were talking about the possibility of bankruptcy for BP.  The anchors were contemplating the company selling assets to pay for things such as dividends and expenses.  To BP’s credit, it is spending $40 million a day on the spill.  One analyst quoted in the Christian Science Monitor is currently projecting BP will spend more than $5 billion this year alone.  (Click here for more on that story.)  That figure will certainly grow as the disaster spreads around the Gulf.  So far, 125 miles of Louisiana coastline has been hit with sludge from the busted well.

According to a recent CNN story, “The four biggest industries in the Gulf of Mexico are oil, tourism, fishing and shipping, and they account for some $234 billion in economic activity each year, according to a 2007 study done by regional scholars and published by Texas A&M University Press.  Two thirds of that amount is in the United States, with the other third in Mexico.”  (Click here for the CNN story.)   Keep in mind that is for just one year.  The President said yesterday, “Untold damage is being done to the environment — damage that could last for decades.”

If you add up the cost of criminal and civil litigation, the damage to beaches and wetlands, lost revenue from tourism and fishing far into the future, the actual damages that the company might pay could run into the hundreds of billions of dollars.  Not even a company the size and strength of BP can take that kind of financial hit and stay in business.  BP’s share price has been nearly cut in half since the spill happened just six weeks ago.  If BP does go under, then the taxpayer will, once again, have to pick up the tab.

This could not have come at a worse time because America has already bailed out everything from banks, hedge funds, car companies and even part of Europe. Not even a world power the size and strength of America can take that kind of hit and not suffer serious consequences.  This gusher will guarantee a financial downturn this year.  I just hope BP will stay in business long enough to at least partially compensate the people whose lives will be destroyed by this enormous mess.