Home
»
Political Analysis
»
The Left Right Paradigm is Over: Its You vs. Corporations 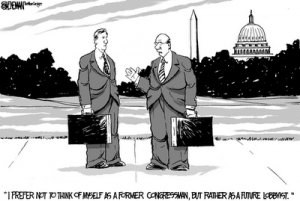 I love the article you are about to read because it is very much in line with some of what this site is about.  USAWatchdog.com is neither “Democrat nor Republican, liberal or conservative.”  I just want to connect the dots and find out what’s really going on, no matter which party is in power.  Guest writer Barry Ritholtz does a great job of laying out real issues Americans need to deal with.  His post centers on corporations and how they have corrupted both political parties.  For example, Goldman Sachs CEO Lloyd Blankfein gave equally to both political parties this year.  Big corporations don’t care who is in power just as long as they get to call the shots.  It is a foregone conclusion that the U.S. House of Representatives will change over to Republican control.  The folks holding the signs that say “fire Nancy Pelosi” are going to get their wish.  But when she is gone as Speaker of the House, I ask, then what?  I haven’t heard Republicans (or Democrats vs Republicans for that matter) talk much about the big banks ripping off the country.  What is unraveling now is the biggest financial fraud in history, but it is not a campaign discussion.  I don’t think it will be addressed when the Republicans take control of the House proving, once again, both Democrats and Republicans are just one body with two heads.

Ritholtz describes himself this way, “I’m Chief Market Strategist for an institutional research firm, and the Chief Economics Commentator for an asset management firm.” I say Ritholtz is a big thinker and a regular commentator in the financial press.  I have been holding this article for about a month because I thought it was more appropriate a day away from the mid-term elections.  I hope this enhances your perspective.  –Greg Hunter–

Every generation or so, a major secular shift takes place that shakes up the existing paradigm. It happens in industry, finance, literature, sports, manufacturing, technology, entertainment, travel, communication, etc.

I would like to discuss the paradigm shift that is occurring in politics.

For a long time, American politics has been defined by a Left/Right dynamic. It was Liberals versus Conservatives on a variety of issues. Pro-Life versus Pro-Choice, Tax Cuts vs. More Spending, Pro-War vs Peaceniks, Environmental Protections vs. Economic Growth, Pro-Union vs. Union-Free, Gay Marriage vs. Family Values, School Choice vs. Public Schools, Regulation vs. Free Markets.

The new dynamic, however, has moved past the old Left Right paradigm. We now live in an era defined by increasing Corporate influence and authority over the individual. These two “interest groups” – I can barely suppress snorting derisively over that phrase – have been on a headlong collision course for decades, which came to a head with the financial collapse and bailouts. Where there is massive concentrations of wealth and influence, there will be abuse of power.  The Individual has been supplanted in the political process nearly entirely by corporate money, legislative influence, campaign contributions, even free speech rights.

This may not be a brilliant insight, but it is surely an overlooked one. It is now an Individual vs. Corporate debate – and the Humans are losing.

• Many of the regulations that govern energy and banking sector were written by Corporations;

• The biggest influence on legislative votes is often Corporate Lobbying;

• Corporate ability to extend copyright far beyond what original protections amounts to a taking of public works for private corporate usage;

• PAC and campaign finance by Corporations has supplanted individual donations to elections;

• The individuals’ right to seek redress in court has been under attack for decades, limiting their options.

• The Supreme Court has ruled that Corporations have Free Speech rights equivalent to people; (So much for original intent!)

None of these are Democrat/Republican [1] conflicts, but rather, are corporate vs. individual issues.

For those of you who are stuck in the old Left/Right debate, you are missing the bigger picture. Consider this about the Bailouts: It was a right-winger who bailed out all of the big banks, Fannie Mae, and AIG in the first place; then his left winger successor continued to pour more money into the fire pit.

What difference did the Left/Right dynamic make? Almost none whatsoever.

How about government spending? The past two presidents are regarded as representative of the Left Right paradigm – yet they each spent excessively, sponsored unfunded tax cuts, plowed money into military adventures and ran enormous deficits. Does Left Right really make a difference when it comes to deficits and fiscal responsibility? (Apparently not).

What does it mean when we can no longer distinguish between the actions of the left and the right? If that dynamic no longer accurately distinguishes what occurs, why are so many of our policy debates framed in Left/Right terms?

In many ways, American society is increasingly less married to this dynamic: Party Affiliation continues to fall, approval of Congress is at record lows, and voter participation hovers at very low rates.

There is some pushback already taking place against the concentration of corporate power: Mainstream corporate media has been increasingly replaced with user created content – YouTube and Blogs are increasingly important to news consumers (especially younger users). Independent voters are an increasingly larger share of the US electorate. And I suspect that much of the pushback against the Elizabeth Warren’s concept of a Financial Consumer Protection Agency plays directly into this Corporate vs. Individual fight.

But the battle lines between the two groups have barely been drawn. I expect this fight will define American politics over the next decade.

Keynes vs Hayek? Friedman vs Krugman? Those are the wrong intellectual debates. Its you vs. Tony Hayward, BP CEO, You vs. Lloyd Blankfein, Goldman Sachs CEO. And you are losing . . .

This short commentary was conceived not to be an exhaustive research, but rather, to stimulate debate. There are many more examples and discussions we can have about this, and I hope readers do so in comments.

But my bottom line is this:  If you see the world in terms of Left & Right, you really aren’t seeing the world at all . . .