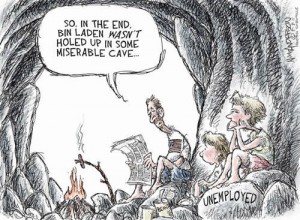 New inflation figures were released by the government last week, and the news was not good.  The headline inflation number was 3.2% in the 12 months that ended in April.  That is more than a percent above the Federal Reserve’s “target” rate of 2% and the first time it has been more than 3% in over 2 ½ years.  Of course, the accounting gimmicks used by the Bureau of Labor Statistics (BLS) understate true inflation, so things look better than reality. Nonetheless, in the latest report from economist John Williams of Shadowstats.com, even the government’s own “official” numbers will likely show double digit inflation in the next three months or so.  The reason is continued money printing in the form of another round of Quantitative Easing (QE) by the Fed to prop up the struggling economy.  Williams said, “The underlying pace of official inflation is accelerating, and could move into double-digits in third-quarter 2011.  Preceding or coincident with that likely will have been some move to QE3 by the Fed and intense—if not panicked—selling of the U.S. dollar and dollar-denominated assets.  Such a circumstance could be a base from which a hyperinflation might begin to unfold with some rapidity.”

And get this, inflation is already in double digits, according to Williams, if it was calculated the way BLS did it more than 30 years ago.  Williams said, “. . . based on reporting of 1980, the April 2011 annual inflation rate would have been about 10.7%.” But, the double digit inflation story is not the one the mainstream media likes to tell.  Instead, it usually focuses on what the government calls “core” inflation that excludes food and energy.   The “core” inflation rate is .2%.  Who lives in a world where the core of existence is not food and energy?  A .2% core inflation rate is both preposterous and insulting to anyone living in the real world.

Inflation isn’t always easy to spot these days because manufacturers are packaging things so you pay the same but get less.  Last week, a Marketwatch.com report said, “While prices for many goods are rising, in cases where prices are steady, the packaging frequently is smaller. It’s an unmistakable trend for grocery shoppers these days: every other package seemingly has a ‘great new look’ for the ‘same great price.’  The problem is that the new look is a few ounces smaller than the old packaging. Or there has been some other creative way to have shoppers pay the same money as always without recognizing that they are bringing less home.” (Click here for the complete story from Marketwatch.com.)

And even though recent consumer sentiment numbers are up, the economy grew a disappointing 1.8% in the first quarter.  Bloomberg reported on Friday, “Another report showed consumer sentiment climbed more than forecast this month, signaling improving job prospects will help sustain spending even as household expenses climb. The pickup in inflation has yet to concern some Federal Reserve policy makers, including Chairman Ben S. Bernanke, who predicts the acceleration will be temporary.” (Click here for the complete Bloomberg report.) “Temporary”?  We all know Mr. Bernanke’s track record on market calls.  He said the sub-prime housing crisis would be “contained” and predicted the economy would “improve” just before it fell off a cliff in 2008. (Click here for a compilation video of Mr. Bernanke’s incorrect market calls over the past several years.)

This acceleration in inflation could not be coming at a worse time because the economy appears to be decelerating.  Williams says, “The underlying fundamentals here of persistent U.S. dollar debasement; a federal government with its fiscal conditions out of control; a U.S. economy not in recovery but heading into renewed contraction; all remain in play.” Unlike Mr. Bernanke, Mr. Williams’ track record on market calls is spot on, and he has it documented on his site (Shadowstats.com) for his readers and subscribers.

I close this with this quote from Milton Friedman, Nobel Prize winner in economics.  He said, “Inflation is the one form of taxation that can be imposed without legislation.”