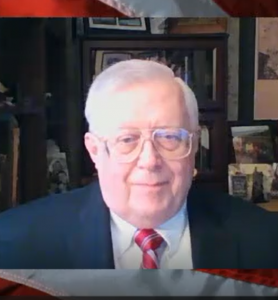 Economist John Williams says don’t put too much faith in the good employment numbers that came out last week because “It’s not as happy of a picture as it looks.” Williams is the founder of ShadowStats.com. His calculations strip out government accounting gimmicks to give a more accurate picture of economic data. Williams explains, “What the Fed has done with their easing, according to the Fed, is they created a circumstance of sustainable moderate economic growth. So, they don’t need to cut rates anymore. That’s nonsense. You don’t have sustainable moderate growth. For example, look at this last month, industrial production is in a state of collapse. . . . Manufacturing is negative. . . . Oil production is collapsing year to year as oil and gas exploration has plunged. . . . Retail sales have been overstated in employment . . . . That’s going to be revised lower. . . . We have been getting better numbers as of late, and the economy is still falling off a cliff.”

Maybe that explains the Fed’s panic moves with $60 billion a month QE, which it says is not QE, and extreme intervention in the repo market where the Fed routinely pumps out tens of billions of dollars in liquidly a night. Williams says, “The system is not stable, and it probably is insolvent. They blew the system back in 2007. They gave up on the domestic economy to save the banking system. . . . They spent all their resources propping up the banks, and they are still doing the same thing, and it’s still costing us in terms of economic growth.”

So, the Fed is pumping out billions of dollars every month, and yet, the economy keeps sinking. What does this tell Williams? “The system is not operating properly. These are stopgap measures, stopgap liquidity that the Fed is putting into the system. If they understood what was going on, they would not be doing that. They wouldn’t have to do it. They have lost control of the system effectively,” says Williams.

Williams goes on to say, “It tells you the underlying system is unstable. I can see where the economy is based on the hard numbers even though they do funny things with the numbers. We are seeing a very weak economy here. Again, the Fed tightened and they eased to help the banks, but they did not do much to help the economy. . . . The banks are not as healthy as they appear and as they have been promoted. The Fed may well be on the brink of the type of crisis they had back in 2007.”

Join Greg Hunter of USAWatchdog.com as he goes One-on-One with economist John Williams, founder of ShadowStats.com.