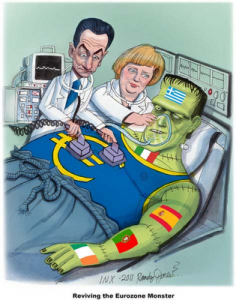 I was surprised to see the Dow only off a few hundred points yesterday considering all the problems European Union finance ministers are having getting a sovereign debt rescue plan together.  A 200 point loss on the Dow dramatically underestimates the amount of damage that could be done if the EU debt crisis goes haywire.  Maybe everyone is thinking the Federal Reserve will ultimately backstop Europe but, then again, the Fed can’t bail out every bank.  One thing is for sure, gold is flashing a bright yellow warning as it rocketed up around $50 yesterday and kept going higher in overnight trading.  Sovereign debt haircuts are looking like they will be at least 50% for most of this debt.  Dr. Marc Faber of Gloomboomdoom.com says Greek debt should be written down “at least 80 to 90 percent.”  With the amount of leverage in the banks (credit default swaps), the real losses could be astronomical, not just in Europe but in the U.S. as well.

Yesterday, French Prime Minister Francois Fillon reportedly warned fellow lawmakers of dire consequences if a debt plan is not reached.   Mr. Fillon said, “We are living in crucial times. If the summit is a failure, this could tip the European continent into unknown territory,” the sources from the ruling UMP party quoted the prime minister as saying during the meeting.  “Pressure does not stop growing on the eurozone and the whole of the global economy,” the sources quoted him as saying. “It is undeniable that the forecasts for global economic growth are undergoing brutal falls.” (Click here for more on that story.)

Some are saying the EU is doomed to fail because of how it is set up.  Economist Martin Armstrong says there is one currency but many debts.  At least in the U.S. there is one currency and one very big debt.  In the short run, it means the U.S. is better off than the EU, but the longer run is a different story of course.  In the end, there are only two outcomes for debt–it gets repaid or it defaults.  Printing lots of money and causing extreme inflation is a form of default.  Former Fed Chief Alan Greenspan summed up the EU crisis nicely yesterday in a CNBC interview when he said, “At the outset of the creation of the euro in 1999, it was expected that the southern Eurozone economies would behave like those in the north; the Italians would behave like Germans. They didn’t,” Greenspan said. “Instead, northern Europe fell into subsidizing southern Europe’s excess consumption, that is, its current account deficits.”

Don’t start chanting U S A, U S A because America is not that much better off than Europe, according to Mr. Greenspan.  The story went on to say, “He also expects the European crisis, coupled with a failure to address the U.S. budget deficit, may be severe enough to cause a bond market crisis if the market suddenly decides the U.S. is more like Greece than not. “It is very difficult to predict when a bond crisis could happen,” he said. But getting an agreement on the U.S. budget will be difficult, he added, because Washington is the most polarized he’s seen it in his career.”  (Click here for the complete Greenspan post from CNBC.)

The European Financial Stability Facility, or bailout fund (EFSF), will likely come to the rescue in the near term, but the bailout facility is woefully underfunded.  It has about $600 billion (440 billion euros) in assets, but many financial talking heads are claiming the EFSF will be pushed up to $1 trillion.  I don’t see how even that is going to be enough because Italy and Spain alone have $3.4 trillion in sour sovereign debt.  It seems to me that the EU is fractured and adrift without direction.  Calling what could be coming “unknown territory” is just a polite way to say we are heading for a total breakdown of the world monetary system.