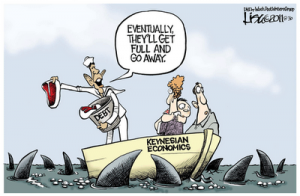 It doesn’t seem that anyone is worried much about another enormous bailout to stabilize the world financial system that kicked off last week.  According to one top European banker, many of the biggest banks there are insolvent.  The problem is so large that the European Central Bank along with the Bank of Japan, Bank of England, Bank of Switzerland, and the U.S. Federal Reserve will all team up and bailout Europe—again.  The ECB is setting up a $600 billion European bank bailout fund, and according to Treasury Secretary Tim Geithner, $600 billion is not enough for the European share of the bailout!  According to Reuters, “In a 30-minute meeting with euro zone finance ministers on Friday, Geithner pressed for the 440 billion euros (more than $600 billion) European Financial Stability Facility (EFSF) to be scaled up to give greater capacity to combat the bloc’s debt malaise, a senior euro zone official said. . . . Geithner’s presence at the meeting underscored the depth of U.S. alarm but ministers were resistant to Washington telling the 17-country euro zone and its finance chiefs what to do.”  (Click here for the complete Reuters story.)

If more than $600 billion is not enough for the EU’s share of bailout money from five of the biggest central banks in the world, then you have yourself one big insolvency problem.  Once again, the solvency of the entire system is threatened.  This is not just an EU bailout.  The last global meltdown caused the Federal Reserve to create and hand out $16 trillion.  That $16 trillion figure is a solid number.    It came from the Government Accountability Office (GAO) compliments of a little provision Senator Bernie Sanders tagged on to last year’s Wall Street reform bill.  (Click here for the complete report.  This is an outrage!)   So, if the U.S. Federal Reserve doled out $16 trillion the last time, how much will stopping this global meltdown cost?  We will never know because the GAO Fed audit was an OTO (one-time only.)

Nothing has been truly fixed since the last bailout bonanza at the end of 2008.  The banks are still allowed to use phony accounting to appear solvent.  There is no public market for over-the-counter (OTC) derivatives market.  The Bank of International Settlements says the OTC market is around $600 trillion.  (Some say the OTC derivatives market is more than twice that size, yes more than a quadrillion bucks!)  Not a single big banker on the planet has gone to jail for wrecking the global economy, and there is still almost zero transparency at the banks.  How many problems get better when you ignore them?  My guess is that this crisis is, at least, just as bad as the last one.  It will take many more trillions of freshly created dollars to get it under control for a second time.

What’s the downside for printing all this money to try and avoid a meltdown?  Economist John Williams at Shadowstats.com lays it out in his most recent report.  Just last week, he said, “To the extent that euro-area problems threaten to trigger a global or U.S. systemic collapse, the Fed—most likely with other parties—will create, spend, loan, or guarantee whatever money is needed to prevent a collapse.  This has been the case for some time, but the cost to the system is inflation. . . “   Check out trajectory of the government’s most recent “Core” inflation numbers below:

The “Core” inflation rate is just shy of 2%, but that excludes fuel and food.  The path is unmistakably trending up—way up.  If you compute inflation the way the Bureau of Labor Statistics did it in 1980, it would currently be 11.4% (according to Shadowstats.com.)  At that rate, the true buying power of your dollars will be cut in half in a little more than 6 years.  So, for those of us living in the real world, where you have to eat and drive a car, prices are going up fast.  The “official” inflation rate has jumped up to only 3.8%, but even that is not exactly good news.

I have to rule out that the inflation we are seeing is due to the economy heating up.  I have to rule in, the so-called “recovery” story is a resounding bust!  Nearly 46 million people are on food stamps—a new all-time record.  Foreclosure notices jumped 33% last week, and unemployment claims are back over 400,000 (428,000) as well.  Oh yeah, you also have to factor in we are starting another massive banker bailout, and you don’t do that because times are good.  I am no economist, but that data suggests to me there is NO RECOVERY!  (This is what I’ve been telling you for months.)  There are just trillions of dollars created out of thin air to bail out the bankers that caused the vast and unprecedented financial crisis the world is still struggling to get under control.

In closing, I’ll leave you with a warning that Shadowstats.com has been giving its readers for several months now.  I’ve reported this before, but with the new massive bailout of EU banks under way, it seems even more relevant and dire than ever.  Williams says, “Massive, fundamental dollar dumping and dumping of dollar-denominated assets could start at anytime, with little or no further warning.  With a U.S. government unwilling to balance or even to address its uncontainable fiscal condition; with the federal government and Federal Reserve standing ready to prevent a systemic collapse, so long as it is possible to print and spend whatever money is needed; and with the U.S. dollar at risk of losing its global reserve currency status; much higher inflation lies ahead, in a circumstance that rapidly could evolve into hyperinflation.”