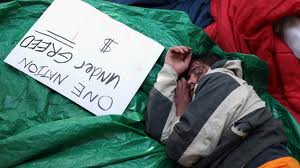 What started out as a little insignificant protest that the mainstream media tried to ignore (or at least downplay) has turned into a global phenomenon in a little less than a month.  One of the many headlines that featured the protesters of the Occupy Wall Street (OWS) movement this past weekend said “From Tahrir Square to Times Square: Protests Erupt in Over 1,500 Cities Worldwide.”  The report from the OWS website went on to say, “the Occupy Wall Street movement has spread worldwide today with demonstrations in over 1,500 cities globally and over 100 US cities from coast to coast. In New York, thousands marched in various protests by trade unions, students, environmentalists, and community groups. As occupiers flocked to Washington Square Park, two dozen participants were arrested at a nearby Citibank while attempting to withdraw their accounts from the global banking giant.”  (Click here for the complete OWS website.)

In Chicago, protesters were chanting “Shame on you” as some of them were being arrested.  The “shame” is for the Wall Street bankers who caused the financial meltdown in 2008.  I believe the protesters think the police are jailing the wrong people.  To date, none of the financial elite have been indicted, let alone investigated.  In the aftermath of the Savings and Loan scandal in the late 80’s and early 90’s, 1,000 financial elites were successfully prosecuted.  The 2008 meltdown is at least 50 times bigger.  I have long thought the reason there are no prosecutions for what is surely massive crime in the mortgage, securities, and banking arena is fear by the government that mass prosecutions would implode the system.  “Too Big To Fail” has turned into “Too Big To Jail”!!

Now, it seems everyone has jumped on the OWS bandwagon.  The SEIU union, the U.S. Communist Party and Nazi Party have all given their support.  Even top Republicans and Democrats are trying to identify with the OWS movement.  The Financial Times reported yesterday, “Referring to protests that have spread from Wall Street to London, Rome and elsewhere, Mr. Obama said: “Dr King would want us to challenge the excesses of Wall Street without demonising those who work there.” Mr. Obama had previously said the protests “express the frustration” of ordinary Americans with the financial sector.

A top Republican in Washington dramatically altered his stance on protesters involved in Occupy Wall Street just one week after comparing the movement to “angry mobs”. Eric Cantor, the Republican majority leader in the House of Representatives, told Fox News on Sunday that Republicans agreed there was “too much” income disparity in the country. “More important than my use of the word [‘mobs’] is that there is a growing frustration out there across the country and it is warranted. Too many people are out of work,” he said.” (Click here to read the complete FT.com story.)

If Democrats and Republicans really want to curry favor with the OWS protesters, Congress should give back all Wall Street campaign donations!!  President Obama should instruct his Attorney General to investigate and indict top Wall Street bankers for a multitude of crimes.  There was securities fraud, mortgage fraud, foreclosure fraud and ratings fraud; and yet, instead of prosecutions, the bankers have gotten the biggest bailouts and bonuses of all time!!!  Meanwhile, millions have lost their homes, and millions more have lost their jobs.  A record 46 million Americans are on food stamps while the Federal Reserve continues to spend trillions of dollars bailing out foreign banks.  People are supposed to get in line and take bug cuts in social programs while banker bailouts continue unabated.  Should anyone be surprised that this is a very tough sell in every country on the planet?  Should anyone be surprised that people are finally “mad as hell and not going to take it anymore”?

This is why those “angry mobs” are in the streets in the first place.  For Democrats and Republicans to jump on this bandwagon while these people are being pepper sprayed and jailed is the pinnacle of hypocrisy.   “Shame on you” both!