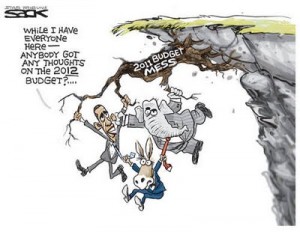 It appears economist Paul Krugman thinks the budget and the economy are not in that bad of shape because he thinks the dire warnings are overdone.  In his latest Op-Ed piece this week, he said, “When I listen to current discussions of the federal budget, the message I hear sounds like this: We’re in crisis! We must take drastic action immediately! And we must keep taxes low, if not actually cut them further!  You have to wonder: If things are that serious, shouldn’t we be raising taxes, not cutting them?”   (Click here for the complete Op-Ed post from the New York Times.)  Yes, that’s right, Mr. Krugman wants to raise taxes just as inflation in food and gasoline are heating up.  It is hard to understand why a Nobel Prize winner in economics wants to raise taxes in the middle of the worst economy since the Great Depression.  He doesn’t just want to raise taxes on the wealthy, but on the middle class as well.  He goes on to say the plan he backs, “. . . also calls for a rise in the Social Security cap, significantly raising taxes on around 6 percent of workers. And, by rescinding many of the Bush tax cuts, not just those affecting top incomes, it would modestly raise taxes even on middle-income families. . . .And the proposal achieves this without dismantling the legacy of the New Deal, which gave us Social Security, and the Great Society, which gave us Medicare and Medicaid.”  So, in Krugman’s eyes, we should continue going broke over the funding of Medicare and Medicaid?

Mr. Krugman also points out that taxes in the U.S., “. . . are much lower as a percentage of national income than taxes in most other wealthy nations.”  Who are those “other wealthy nations?”  Japan, France, Spain, the UK?  What Krugman conveniently leaves out is there is a sovereign debt crisis going on with many “wealthy” western countries.  Many are broke and are in severe budget crisis because of their cradle to grave nanny states.  Right now, the economy is in such bad shape that a record number of people require government handouts to survive.  A USA Today article said yesterday, “A record 18.3% of the nation’s total personal income was a payment from the government for Social Security, Medicare, food stamps, unemployment benefits and other programs in 2010. Wages accounted for the lowest share of income — 51.0% — since the government began keeping track in 1929.”  (Click here to read the complete USA Today article.)  I don’t see how we can be in a recovery if record numbers of people require government handouts.  The last thing these people need are tax increases, on top of crushing inflation that will only get worse.

Inflation goes hand in hand with money printing, and America is printing dollars at an alarming pace.  Recently on his website, Congressman Ron Paul said, “Even the most conservative budget that has been proposed by Republican leadership requires raising the debt ceiling by an additional $9 trillion by 2021.  This demonstrates absolutely that no one in power right now has any real intention of addressing our spending problems or paying down the debt.  They simply expect to continue to borrow and run up more debt forever, without limit.  Yet they always imagine our dollar will have value no matter how many we print.    This expectation is foolish and naïve.  I guarantee that those buying our debt are not foolish and naïve enough to go along with this charade forever.”  (Click here for the complete Ron Paul post.)

Other countries are not happy with the money printing by the U.S. which is currently the world’s reserve currency.  BRIC countries (Brazil, Russia, India and China) held a summit recently, and according to financial writer JR Nyquist, the BRIC countries would like nothing better than to crush the U.S. dollar and change the balance of power.  Nyquist writes, “The sequence of unraveling is easy to follow. If you dump U.S. Treasuries, how will the U.S. dollar remain the global reserve currency? In that event, how will the United States finance its deficit spending? Interest rates would skyrocket, with predictable consequences.”  (Click here for the complete Nyquist post.)  The U.S. would be forced to print even more money to finance its debt, and the dollar would hyper-inflate.  This is not some farfetched scenario, but a definite possibility.  Nyquist goes on to say, “The BRIC summit testifies to the desire of Russia and China to undermine the dollar. However crazy you think such a scheme, they are nonetheless pursuing it. You might say it makes no sense, but you are not a “former” KGB officer or a member of the Chinese Communist Party. Do you really imagine that KGB officers and Communists are bourgeois, like you? No, they are not. They are the declared enemies of the bourgeoisie.”

The U.S. is in a very serious economic and budget quagmire with no easy road out.  The Paul Krugmans of the world would like you to think that everything is okay with the economy–go back to sleep.  But if you do that, you will surely wake up in a nightmare.