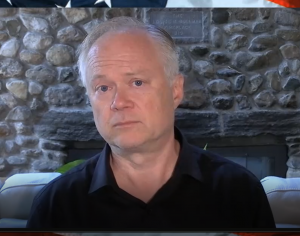 Dr. Chris Martenson is a futurist, economic researcher and holds a PhD in toxicology from Duke University.  New statistics out by the CDC say the overwhelming majority of people have less than a .5% chance of dying from the CV19 virus.  Martenson contends there was an overreaction to CV19, and real treatments have been ignored that could have saved lives.  Martenson says, “Australia, UK, United States and a lot of Europe are going a little overboard on this whole thing and being ignorant and unsophisticated.  If you are unsophisticated, you say we have to lock the whole country down.  If you are sophisticated you say, no we don’t.  People who are a little bit older and with co-morbidities, let’s keep them safe, and everybody else can get on with their lives.”

Dr. Martenson says, “We should open back up, and we can do it safely.” Martenson says officials lied about the safety and effectiveness of treatments such as the combination of Hydroxychloroquine (HCQ), zinc and Azithromycin.  Martenson says, “A lot of people could have been saved. . . . I know of doctors that were running trials where they were investigating HCQ, and they designed the trials to fail. . . . In one really tragic case in the UK, they took people past the replication cycle, and not only really sick . . . but they gave them toxic doses of Hydroxychloroquine and said look, this stuff actually makes people sicker and not better.  It’s hard to describe how evil that really is.  I am shocked by what I’ve been seeing.”

Martenson says severe economic damage has been done to the economy.  Wall Street wins while Main Street loses.  Martenson contends, “The economy is very bad at this point in time, and it’s being covered up by a very, very complicit Federal Reserve that is just propping markets up.  Citadel, the hedge fund where Former Fed Chief Ben Bernanke works, is just crushing it this year.  The first half of the year they made more money than any other year.  His company does nothing but just front run the Fed and scoop billions of dollars.  The Fed is just rewarding skimmers and grifters. . . .Meanwhile, Yelp just reported that nearly 100,000 U.S. businesses have permanently closed.  There are coffee shops, restaurants, little inns, hotels and all kinds of things, and they are just crushed in this story.  The Fed has been shoveling money to the super elites while everybody else has been suffering. . . . The stimulus that has gone out has mainly gone to the well-connected, the megacorporations and the big banks.  It’s really just cut the legs out from the upper middle class on down.”

Dr. Martenson also says that because of all the money printing that has already happened with much more to come, there will be some big inflation bubbling up.  Martenson predicts, “Follow with me out to June of 2021, and we are going to find ourselves in a situation where the shale oil miracle has collapsed . . . to five or six million barrels a day.  We are going to be demanding, and our economy is going to be on fire at that point because of all this free money that is just sort of floating around.  Then we are going to see inflation good and hard. . . .We are going to have actual oil based inflation come through at that point in time.  That is the prediction I am working with right now.  People need to be ready for that, and that is what our seminars are all about.”

Martenson likes physical assets such as gold, silver and farm land.  Martenson shows people how to be more resilient for what is coming.

Join Greg Hunter of USAWatchdog.com as he goes One-on-One with the co-founder of PeakProsperity.com, Dr. Chris Martenson.

There is lots of totally free information and analysis on PeakProsperity.com.

The Peak Prosperity annual (online) seminar is coming up October 24 and 25, 2020 and you can get an “early bird” discount if you register before Sept. 30.  For an additional 10% discount, use the code USA 2020.  Click here if you would like to attend this online event.