Home
»
Political Analysis
»
Failure Is the Only Reform We Need 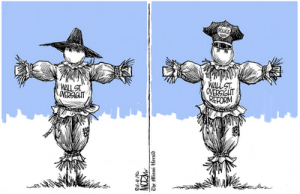 There was lots of talk this week about financial reform for Wall Street.  The President gave a speech yesterday on the legislation that is making its way through the Senate.  Obama said, “It is essential that we learn from the lessons of this crisis so we don’t doom ourselves to repeat it and, make no mistake, that is exactly what will happen if we allow this moment to pass – and that’s an outcome that is unacceptable to me and it’s unacceptable to you, the American people.”  On this reform, I am squarely behind the President because it was unregulated, reckless Wall Street bankers that caused the lion’s share of the crisis.  They should not be allowed to fail and bail again.

I think the biggest problem this reform will address is the murky waters of the $600 trillion derivatives market. (Some say the derivatives market is more than a quadrillion bucks.)  This is a dark unregulated pool of all sorts of exotic complicated securities with no standards, regulation or public market.  No public market means there is no real way to set a value, such as in the oil market, the stock market or the bond market.  That’s why you hear Wall Street big wigs say “derivatives are hard to price.”  (It is hard to put a value on junk.)  If there was a public market, you would find out what traders would be willing to pay for it.  This is the same as putting a house on the market.  It is only worth what someone is willing to pay for it.

It appears there will be some sort of financial reform that will be passed by Congress.  I am wondering if this is too little and much too late.  The new regulations will not affect the $600 trillion ball of toxic junk that is already out there.  This is like putting a couple of bucks in your bank account after you have already bounced $100,000 in bad checks.

The derivatives market is a rigged game where Wall Street wins and everyone else loses, and when the bankers did lose, they came crying to Washington to bail them out.  We were told if the big banks did not get a bailout and fast, it would be another Great Depression.  We will never know what would have happened if we let them all fail.  I think the banks should have been allowed to go bankrupt.  Instead, America rewarded the incompetent, greedy and fraudulent with what appears to be unlimited taxpayer largeness.

I wrote about this last year in a post called “Default Option.”  Here is some of what I said:  “Letting those banks take the hit for their ill advised, reckless investments based on greed will do many things.  Here are just a few.  Letting the reckless banks fail will limit taxpayer exposure, preserve our capital and our credit rating as a country. Bank failure will wash bad debt out of the system once and for all and protect the dollar from free fall.  Finally, I think in the end it will be cheaper and more effective than what has and will be done in the future to “fix” the credit crisis.”

I also said, “The only people that should be protected with taxpayer money (even though it will cost trillions) are the depositors.  Without depositors you do not have a banking system. Depositors are savers, and that is what is needed for capital formation.  We do not need anymore debt formation.” (Click here for the original post.)

The big turning point with the derivatives market came back in 1998.  That’s when a hedge fund called Long Term Capital Management got into deep financial trouble because of derivatives.  There was possible threat to the world economy if LTCM failed.  Fed Chief Alan Greenspan organized a multi-billion dollar bailout.  At the time, the entire pool of derivatives was about $80 trillion.  There should have been regulation instituted then, but Greenspan and other financial titans said we “did not need to regulate derivatives.”  Instead of regulation, we got a repeal of the Glass Steagall act.  That allowed banks to grow enormously and become what is now known as “too big to fail.”   In 1999, a brief by the CATO Institute summed up what the Fed did a year earlier.  It said, “. . . it implies a major open-ended extension of Federal Reserve responsibilities, without any congressional authorization; it implies a return to the discredited doctrine that the Fed should prevent the failure of large financial firms, which encourages irresponsible risk taking; and it undermines the moral authority of Fed policymakers . . .” (Click here for the complete CATO report.)

Wow, how prophetic!  The Fed is printing money like never before to continue bailing out a toxic ball of financial junk– threatening life as we know it.  The best financial reform is to let companies fail when they are stupid, greedy and bent.  That didn’t happen in 1998 or 2008.  I predict it will not happen in the next financial meltdown either — and there will be a next time sooner that you think.