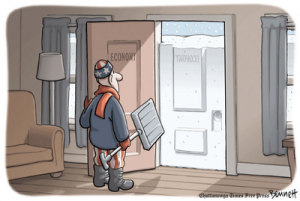 From the very beginning of QE2, it was no secret the Federal Reserve wanted the stock market to rise.  The Fed got its wish.  Many people see the stock market increase of nearly 20% in a few short months as a sign things are turning around.   The turnaround is really a mirage of the printing press.  Even so, some pundits think the economy is on the mend.   Maritime News reported last week, “It has been successful,” Peter Hooper, chief economist at Deutsche Bank Securities Inc. in New York, said of Bernanke’s policy of pumping money into the financial system, dubbed QE2. “It’s contributed to the rally in the stock market” and has “been important in reducing substantially the downside risk of deflation.”  (Click here for the complete story.)  Pumping money into the stock market to get stocks to go up is not the same as hiring people and making products so share prices grow.  With the stubbornly high unemployment rate of 9.8% (or more than 22% according to Shadowstats.com), this is just one of the dismal facts of this economy.   Other gloomy indicators are the million plus foreclosures this year and next.  The auto industry just had its fourth month of decline in new orders.  The FDIC has shut down 157 banks so far this year, and all the banks look solvent only because of rule changes that amount to government sanctioned accounting fraud.  You cannot have the banks, housing and auto sales all tanking at the same time and expect the party to last.

For the life of me, I cannot see how share prices going up are going to get businesses hiring again.  This stock market rally is good for one group of people—insiders.  They are selling at a rate of more than 10 to 1 over buyers.   It is obvious this market is not growing organically but is simply being pumped.  Now, people should look out for the dump.  Will the market continue to rise?  Will there be QE 3, 4, 5, 6, 7 or to infinity?  Is printing money the true road to wealth and prosperity?  I think you know where I’m going.

A funny and clever way to illustrate what is going on has been put together using a site called Xtranormal.  There have been a series of financial cartoons produced with the help of this site that explains the economy.  Below is one of the latest called “Suckers rally: Pimp Bernanke and the Psychopathic Super-Whores of CNBC.”  (Yes, this the actual title.)  Enjoy the cartoon below: