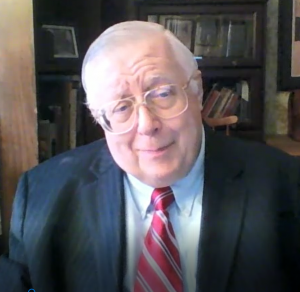 Economist John Williams says the recent rate hikes mean the “Fed is killing off the economy.”
Williams says, “I heard President Trump make some comments to that effect, and he’s right. The Fed is trying to raise rates. The idea is if you get higher rates, the banks will be able to make more profits on their lending. It will also encourage bank lending. Unfortunately, on the consumer end, it raises the consumers’ cost of borrowing as interest rates go up. It makes mortgages more expensive. It makes borrowing more expensive. Mortgages go up, people don’t buy as many houses. What you are seeing right now is effectively a recession in the housing market, in the construction area. Existing home sales have been down for six or seven months in a row, and it’s down year over year.”

Williams says, “The Fed is trying to get the system back to normal.” In doing so, the Fed could kill the system. Williams says, “Well, that’s what they are doing. In many ways, it would have been easier if the banking system would have collapsed and had a banking holiday, and restructured it and reopened it back in 2007 and 2008. That would have been a very difficult time for the people who owned the banks, and again, the Fed owns the banking system.”

So, they are trying to fix the banks, and to do that, they will simply screw the consumer? Williams says, “Well, they have an escape clause. Former Fed Head Janet Yellen said that if the economy falls back into recession, ‘we will just go back into quantitative easing’ (QE/money printing). I think that could easily happen here. When the economy goes down, it increases the liquidity stresses on the banking system. There is default on debt, and companies tend to go out of business. That will stress the bank earnings. QE was aimed at propping up the banks in tough times. The Fed is very open to QE, and from the Fed’s standpoint, I think we are going to end up in a perpetual state of quantitative easing, unless they let the banking system reorganize and get a new functioning system. It’s still not functioning.”

We all know that is not going to happen. Williams says, “As they keep going here, there is going to be hyperinflation. The dollar will weaken. Gold and silver will rally, and that will be part of a self-feeding cycle, which will get you into very high inflation. . . . If the Fed can’t get this banking crisis worked out, I would not be surprised to see a complete overhaul of the system.”

John Williams posts some free information on ShadowStats.com. You can also become a subscriber by clicking here.