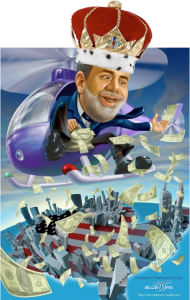 The Federal Reserve held its first press conference in its 97 year history last week.  In my mind, it did this because it recognizes the deep financial trouble the U.S. is in.  It wants to put a positive spin on the mess it largely created and/or allowed to happen.  After all, it was Tim Geithner who was the head of the New York Fed during the go-go years of the mid 2000’s.   He was supposed to regulate the big Wall Street banks. You see how well that worked out—the entire system melted down and Geithner got a promotion to Treasury Secretary.

I’ll give my interpretation of a few of the important points the Fed was trying to get out to the public.  Overall, the Fed wants people to keep their confidence in a system where money is loaned into existence.  Yes, that’s right.  Every time you swipe your credit card, you are not borrowing money but creating it.  The banks love this because there is virtually no cost to them, and you have to pay back the money with interest just for the privilege of going into debt.   Can you see why the Fed wants to keep this confidence game going?

My interpretation of a few specific points brought up in the Press conference hosted by Fed chief Ben Bernanke are:  high oil prices are not the fault of the Fed; neither is the weak dollar, that is the Treasury Department’s problem even though U.S. dollars say “Federal Reserve Note” across the top of every single one of them; and finally (and this is my favorite), the second round of Quantitative Easing (QE2) will end by June 30th.  (Click here for more on the Fed press conference from Reuters.)

The overt fed money printing of $75 billion a month is going to end, but the covert money printing will not.  It can’t because who will step in and buy all that debt at discount rates?  Jim Rickards, Senior Managing Director for Market Intelligence at Omnis, Inc., thinks the Fed will still be printing “$750 billion” a year.  Rickards wrote a piece about 5 weeks ago spelling out why he thinks QE will be “perpetual.” Rickards is a big thinker, and he is the insider’s insider.  He says, “The Fed is now like a 400-pound man who can eat 5,000 calories per day without gaining weight because his morbidly obese metabolism requires it to function. The discussion of QE, QE2 and QE3 has become irrelevant. What we have is permanent QE until such time as the Fed decides to tighten financial conditions. This is unlikely to happen until mid-2012 at the earliest, perhaps later in view of the housing double-dip and increasing oil prices. In any case, QE will be with us for an “extended period” no matter what the Fed announces.” (Click here to read the complete post from King World News.)

The continuing fed money printing to prop up an insolvent system is flashing a long-term green light to gold and silver.  Jim Willie at Goldenjackass.com says, the green light is stuck on and will not turn red until there is resolution and reform.  Mr. Willie wrote in his latest post, “Have they liquidated any big US banks??  Has any reform come for encouraging the return of US industry??  Has any regulatory reform been pursued for expanding business?? Have they stopped printing money to cover debt??  Has any reduction in USGovt deficits been realized??  The answer is a loud NO on all counts of the basic test, which signals a continued bull market in precious metals.” (Click here for the complete post from Jim Willie.)

Economist John Williams, founder of Shadowstats.com, says the inflation in food and energy is coming from a weakening U.S. dollar.  Inflation will increase as the value of the dollar decreases.  In his latest report, Williams says, “U.S. inflation is on the rise, due primarily to the Fed’s successful efforts at starting to debase the U.S. dollar.  It is the dollar’s weakness that primarily has driven oil prices higher, more so than political tensions in the Middle East and North Africa, or Mr. Bernanke’s suggestions of surging global oil demand.  As a result of Fed activity, the U.S. dollar has lost its safe-haven status and is hitting all-time lows against a number of major currencies. . . . even the Fed’s Vice-Chairman has acknowledged current Fed policy is weakening the U.S. dollar.”

Williams says the U.S. is sliding towards “systemic solvency crises,” and the dollar continues to fall “unabated.” He is predicting hyperinflation within a few years, at the latest.  So, no matter what the Fed says it’s doing, the evidence shows a trail of never ending money printing.  This will only enrich the few, while robbing the masses of their money’s buying power.