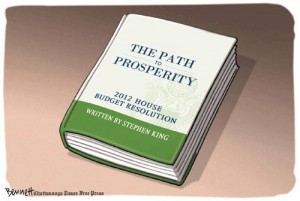 This week, President Obama gave a speech outlining his plan for long term deficit reduction.  He invited the Republican leadership for what many thought would be some sort of bi-partisan federal budget 2011 solution.  In reality, it was kind of a St. Valentine’s Day massacre because right off the bat, Mr. Obama pulled out the Presidential tommy-gun and started shooting. He said, “This debate over budgets and deficits is about more than just numbers on a page, more than just cutting and spending.  It’s about the kind of future we want.  It’s about the kind of country we believe in.”

Surprise, surprise.  The kind of country President Obama “believes in” is a lot different than the Republicans.  The President said the Republican plan “ends Medicare as we know it.” Sounds to me the President will play the class warfare card during the 2012 election season because he went on to say, “The top 1% saw their income rise by an average of more than a quarter of a million dollars each.  And that’s who needs to pay less taxes?”  (Click here to read the entire text of the President’s deficit speech.) I can see why the President is playing to lower income people.  Recently, a poll revealed a majority of the poorest Americans no longer support Obama.  CNSNews.com reports, “President Barack Obama’s approval among the poorest Americans dropped to an all-time low of 48 percent last week, according to the Gallup poll, leaving the president with less-than-majority approval among all income brackets reported in Gallup’s presidential approval surveys.” (Click here to read the complete CNSNews.com story.)

The two big issues will be billions in Medicare and Medicaid cuts (especially Medicaid) and a $1 trillion tax increase.  I see these two issues as real sticking points.  Relative to the Republican plan, the President only wants to make small changes to health care entitlements.  Obama clearly wants health care entitlements to grow, not shrink (remember Obamacare?)  Also, the Democrats and Republicans came within an hour of shutting down the government over $38 billion in cuts.  There is no way the two parties are going to agree on some compromise on a trillion bucks in tax hikes.  These two issues alone spell budgetary gridlock.  House Budget Chairman Paul Ryan said the President’s speech was “excessively partisan” and “dramatically inaccurate.” These are not the kind of words you use when you are laying the groundwork for a compromise.  I am sure Congress will play chicken again, over the budget, in the government shutdown game.

I don’t know which party has the best plan, but I do know the U.S. is in deep financial trouble.  Gridlock is not going to help with dramatic and badly needed cuts in spending.  In March alone, the federal government spent 8 times more money than it took in.  The U.S. collected $128 billion and spent more than $1.1 trillion (or $1,100 billion!)  Neither party addressed the other new welfare plan we have started for crooked bankers who have ripped-off the country and caused the financial meltdown in 2008.  The latest outrage is the $220 million in bailout money given to the wives of two Morgan Stanley bankers.  (Click here to read the complete story.)

Another piece of banker welfare, and in my opinion criminal cover-up, is the sweetheart deal federal regulators just cut with the banks over the ongoing foreclosure fiasco.  There has not been a single prosecution or conviction of a financial elite over the meltdown, only a federal investigation that identified “significant weaknesses”in mortgage servicer practices.  Twelve million families will lose their homes by 2012, and not a single criminal charge?  If that’s not banker welfare, I don’t know what is. (Click here to read more about this rotten deal.)

Then, there is the $127 billion of possible “buy backs” of rotten mortgages dumped into Freddie Mac.  Bank of America got forgiveness by the government for this extraordinary amount, and neither party made a sound about it.  This is more banker welfare, and plenty of other big banks will want and get a similar deal.  How can we have a serious budget debate when neither party will even talk about the $5 trillion in liabilities at Fannie and Freddie?

Yesterday, Treasury Secretary Tim Geithner warned Congress about possible default of U.S. debt if the debt ceiling was not raised from the $14.3 trillion it stands at now.  We are $1.6 trillion in the red for this budget.  What do you think the chances are it will be raised by more than $1 trillion?  We will not cut the deficit because of the coming federal budget gridlock.  Congress will take the easy way out and take on more debt to avoid default.  That’s kind of like going to war for peace.