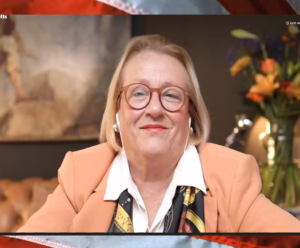 Catherine Austin Fitts (CAF), Publisher of The Solari Report and former Assistant Secretary of Housing (Bush 41 Admin.), says we are at war with the Deep State globalists that want nothing short of total control over all of mankind.  Central bankers want a financial system that is a lawless criminal control syndicate where it’s legal for them to do whatever they want.  It is simply a choice between tyranny and sovereignty, freedom or slavery.  We start with the foundational building block of tyranny, the Central Bank Digital Currency (CBDC) that global bankers want to install in the financial system.  CAF says, “It’s not a currency.  That’s what you need to understand.  What we are talking about is a control system that is going to be implemented in a global coup d’état, and we are in the middle of a global coup d’état.  That’s what is happening right now.  Essentially, if you look at the central bankers, the BIS (Bank of International Settlements) and all the central bankers are trying to create a system where they are completely free of the laws of nation states and governments.  In other words, they are inserting sovereign immunity from all laws and literally trying to create a civilization under the law where they are free to do whatever they want, including, as we know—genocide.”

CAF says to fight back against CBDC is to use cash.  Fitts says, “If you go to Solari.com, you will see something that says, “Cash Every Day.”  Click the big red cap that says, “Make Cash Great Again.”  If you click on that, you will get three videos.  There are two videos I really want your audience to watch.  One is a 56 second video of the BIS general manger Augustin Carstens in October 2020 explaining with CBDC they will have central control and enforce them centrally.  It’s the only time in my life that I saw a central banker be 100% honest.  The second video says “Financial Rebellion,” click it and you’ll get three minutes of a presentation by Richard Werner.  He is certainly the top scholar in the world on central banking. . . .  Richard explains that one of the top central bankers in Europe told him they are planning on chipping all of us.”

CAF says central bankers will ignore the U.S. Constitution, steal all of our assets like cash and gold but especially the land.  CAF contends they won’t be able to do this unless they take our guns and extinguish the Second Amendment.  CAF also talks about what she thinks will happen after the first of this year when it comes to inflation or deflation.

CAF contends the good news is people are waking up and this evil criminal system can be stopped.  CAF says, “Saint Paul said in Timothy, ‘Just stand and watch the divine go to work.’  They can’t do this.  Did you see what just happened in Ireland?  They tried to go all digital, and they had so many people cancel their accounts, they had to walk it back. . . . One thing the Bible makes clear is it will at times look hopeless, but it won’t be.  That’s why you have to stand.”

There is much more in the 1 hour and 10 min. interview.

Join Greg Hunter of USAWatchdog.com as he goes One-on-One with the Publisher of The Solari Report, Catherine Austin Fitts. (7.30.22) 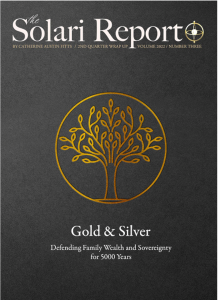 To see the short videos on total control and chip system installed in humans, click here.

The “Gold and Silver” 2nd Quarter Wrap-Up is available now.  Click here to read more about it.