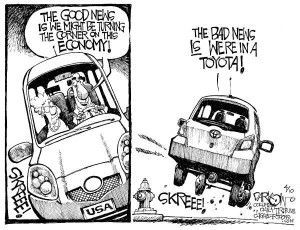 This is what John Williams of shadowstats.com does so well.  He follows the money and many other statistics to reveal what is likely going to happen in the economy.  For example, at one time the government kept track of how much money was in the overall economy.  It was a statistic called M3.  It kept track of things such as how many dollars are in checking accounts, savings accounts, money markets and even cash in the pockets of Americans.  The government stopped publishing this statistic in March 2006 because it was too “expensive.”  Williams picked up where the government left off.  He recreated M3, and now calls it M3 SGS, so he could continue to “follow the money.”  By computing this number the way the government used to do it, Williams can tell if the overall supply of money is growing or contracting.

According to shadowstats.com (also known as Shadow Government Statistics), the M3 SGS (overall money in the economy) rocketed up from 2006 to early 2008 and has been in a steep decline ever since.  This means the overall amount of money in the “real” economy is shrinking.  According to Williams, the money in the system is not just shrinking by a little–but by a record amount.  In his latest report, Williams said, “the worst annual contraction in modern economic reporting of real (inflation-adjusted) broad money supply continues, signaling looming deterioration in U.S. business conditions, an intensified economic downturn or ‘double-dip recession’ in popular terminology.”  “Double-dip recession” is what is coming to the economy, not a “recovery.”  This is completely contrary to what you have been hearing in the mainstream media.

Nearly all states in the union face large financial shortfalls.  Many cities are also coming up short in the budget department.  In a Bloomberg story early last week, the comptroller of Los Angeles gave the city a month before it ran out of cash.  The only answer for L.A. is to raise taxes and fees, cut services or both to get the budget in line.  This is a recipe for some real pain.

Remember, states and cities cannot just print money like the federal government.  I predict as the pain grows in this election year, money printing will once again be turned back on full blast to bail out some cities and states. But not every state and city will be saved from massive budget cuts.  This is why I’ve been saying from the beginning of the financial crisis, the economy we are facing is a “freak show of bailout and default.”  If you follow the money, it is drying up right now.  But don’t worry, because this will give way to a new flood of money created out of thin air to ease the “pain” of living within your means.  The only thing you can count on in the future is inflation– and lots of it.