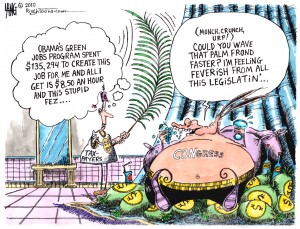 The Obama Administration is planning to seek a spending freeze for 3 years on domestic discretionary non-security spending.  Officials say the freeze could save $250 billion over the next 10 years.  That may seem like a lot of money until you compare it to the most recent national debt-limit raise of $290 billion last month.  It sure looks to me like we have already spent the future savings and then some.

This new agenda is being put forward while the Senate is debating raising the national debt level again by a whopping $1.9 trillion!   Add the $290 billion from last month and this is nearly a $2.2 trillion increase in the debt limit in less than 2 months!  It would give the Treasury a $14.3 trillion ceiling for borrowing to run the country.  And get this–the Congressional Budget Office is projecting a $1.35 trillion deficit for 2010!  Last year’s red ink was a record $1.4 trillion.  The $2.2 trillion in new debt will just get the country through the November election.

There has already been 9 national debt limit raises in the last 9 years, and number 10 is coming soon.  I do not see how you can save money on one hand while you spend it on the other.

It is hard to argue that what the country really needs is big spending cuts and not debt-limit increases.  The party in power will rarely cut spending, especially during an election year.  Look at the spending of the Bush Administration.  Congress raised the nation’s debt-limit 8 times in 8 years. The Bush tax cuts were supposed to produce more money for the government.  What happened?

President Obama is keeping with the tradition of spending and forcing up the debt ceiling every year; but this time, he will also be asking for tax increases to offset the deficit.  There won’t be many in the House and Senate that will want to vote for either tax increases or painful budget cuts.  So, Congress takes the easy way out and increases the deficit.  That’s what’s wrong with Washington.  Neither party wants to take tough actions, and both want to blame the other side for the mess we find ourselves in now.

A new debt ceiling will surely pass; otherwise, the U.S. will risk defaulting on its obligations, and that is not in the cards.  But what is in the cards, according to economist John Williams of Shadow Government Statistics, is a problem selling that much new debt.  Williams told me, “The Treasury will not be able to sell the debt easily, and the Fed will have to take the position of buyer of last resort and will monetize the debt (print money) and create more inflation pressures.”

How do you think the holders of Treasury Bills, corporate bonds, and dollar reserves will react to the news of yet another giant increase in U.S. debt?  The new debt ceiling of $14.3 trillion will roughly equal the Gross Domestic Product of America!  Could foreigners get queasy about the buck and sell everything dollar denominated?

Williams says, “A massive dollar sell off in 2010, I think, is a fair bet.” My prediction is the 2010 federal budget will set another record for red ink because there will be much more economic “stimulus” before the November election.