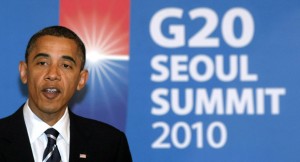 The G-20 kicked off in Seoul South Korea this week.  It seems to me everyone should be talking about the U.S. defaulting on its obligations by massive money printing.  Instead, the group of twenty finance ministers and central bankers from the most important industrialized and developing economies of the world has been sidetracked.  There is the threat of a North Korean attack on South Korea.  The Guardian UK reports, “The British delegation is taking seriously the potential threat of an attack on the G20 summit by North Korea, whose border is just 50 miles away from the gathering in Seoul.  A diplomat said: “There has been speculation that the North Koreans will attempt some kind of disruptive incursion into South Korea.” (Click here for the complete Guardian UK story.)

Then, there is the latest PIIGS (Portugal, Italy, Ireland, Greece and Spain) problem that has popped up.  It seems Ireland has the Group preoccupied with another bailout in the EU.  Reuters reports, “Ireland’s issues have moved to the forefront of currency concerns recently after taking a backseat to U.S. Federal Reserve policy for several weeks. Yields on 10-year Irish bonds rose well above 8 percent to a record high over comparable German debt, the euro zone’s standard.  Investors are worried Ireland would not be able to cut spending as planned and may require a bailout, with bond holders forced to absorb losses.” (Click here for the complete Reuters story.)

There is also talk of a looming trade war among the G-20.  The Associated Press reports, “A dispute over whether China and the United States are manipulating their currencies is threatening to resurrect destructive protectionist policies like those that worsened the Great Depression. The biggest fear is that trade barriers will send the global economy back into recession.  Hopes had been high that the Group of 20, which includes wealthy nations like Germany and the U.S. and rising giants like China, could be a forum to forge a lasting global economic recovery. Yet so far, G-20 countries haven’t agreed on an agenda, let alone solutions to the problems that divide them.” (Click here to read the complete AP story.)

Yes, a trade war could do great damage but, to me, that should take a back seat to what the Federal Reserve is doing by starting another round of quantitative easing (QE2).  The Fed is printing up a fresh $600 billion (for starters) and is on its way to turning the dollar into candy wrappers and toilet paper.  This is the currency that most of the world uses for international trade.  I cannot believe this is not the first item on the agenda of the top financial officials in the world!

The U.S. is effectively going into bankruptcy.   John Allison, former CEO of America’s tenth largest bank, BB&T, said recently it is a “mathematical certainty” that the United States government will go bankrupt unless it dramatically changes its fiscal direction, according to CNSNews.com.  The story goes on to report, “Now, countries don’t go bankrupt the way companies do,” said Allison. “They don’t file bankruptcy. They usually hyper-inflate. They print a bunch of paper money, or they become Third World economies like Argentina–unless we change direction.”  (Click here for the entire CNSNews.com report.)

The world is already changing direction and getting out of dollars and into gold, silver, oil, agricultural and other commodities.  The world is buying “things” and shunning the dollar.  It has been a slow process but is now picking up speed because of QE2.

Meanwhile, the direction the U.S. is heading points clearly to printing money out of thin air to paper over severe economic problems.  The Fed is hoping QE2 will get things back to “normal,” but what it is doing is not repairing the damaged economy.  In his latest report,  economist John Williams of shadowstats.com says, “. . . the Federal Reserve not only has begun a process from which it will be increasingly difficult to withdraw, but also has begun a process that likely will have to be accelerated in the months ahead, in response to mounting U.S. fiscal and systemic-solvency problems intensified by a still-unexpected “double-dip” recession, as well as in response to intensifying selling and dumping of the U.S. dollar and dollar-denominated paper assets in the global markets.  Such locks-in one of the underlying prerequisites for the U.S. economic environment to evolve into an unthinkable hyperinflationary great depression.”

Most do not realize things will not get back to the way they were.  There is a “new normal.” Americans will have to get used to much higher inflation (at the very least) and a much lower standard of living.  It has been reported the G-20 will announce something being called a “great leap forward.” It is a plan to sustain growth in poorer countries.  That’s just great for impoverished nations, but nothing is being done to stop America’s financial slide into poverty.  Maybe that is what the G-20 really wants.