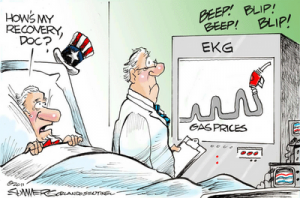 Gas prices 2011! Oil prices are on the rise.  The price per barrel rose again yesterday, and so did gas prices.  According to AAA, the national average price of unleaded gasoline added a penny, climbing to $3.879 per gallon.  It is already more than $4.00 a gallon on the east and west coast, and don’t expect the price to go down before it goes way up. James Howard Kunstler has researched and written books on fictional depictions of the post-oil American future.   Kunstler forecasts very tight oil supplies, with dreadful consequences for our society.   In his latest article, Kunstler takes the President to task for blaming the recent price spike on “speculators,” while turning a blind eye to the crooked bankers who brought down the world economy in 2008.  Please enjoy this excellent post.  –Greg Hunter–

“The Banana Peel of Destiny”

That was a cute move by President Obama last week, calling out the “oil speculators” with a memo to his Attorney General, Eric Holder.  The President proved a few weeks ago, in his energy speech to the nation, that he doesn’t understand how these resources are produced and traded. Consequently, the people he addressed remain clueless, but ticked off nonetheless. And the logic of politics now compels Mr. Obama to call out the dogs on… people who make money trading paper claims on oil?

Funny, he didn’t show any interest the past two-plus years in people who make money swindling taxpayers via booby-trapped Collateralized Debt Obligations and Credit Default Swaps. Maybe those things sound too abstruse to get excited about – but believe me, it was a heckuva lot more money. In fact, a case could be mounted by God’s attorney general – if he has one – that Mr. Obama abetted a gigantic conspiracy in fraudulent financial paper which makes the oil speculators look like shoplifters in a Kentucky Wal-Mart.

For those of you interested in the reality side of things, here’s the scoop:  The price of oil is going to go way up, and way down, and way up again, and way down again until everyone is too broke to ask for any, and companies are too ruined to go get it for them, and governments are too broken to interfere in the process.

The oil speculators are normal characters in a stressed market doing what needs to be done on the margins of “price discovery.” The trouble arises when price discovery occurs in turbulent times and places, for instance, when people in a part of the world called the Middle East & North Africa (MENA, for short), start rioting against their governments, which has been the case persistently for a couple of months now – a region that contains about half the world’s oil reserves. So interested observers conclude there’s a fair chance that oil production there might face impediments to normal operations.

And indeed that is already the case in Libya, where some of the world’s lightest, creamiest, sweetest crude oil has stopped flowing into pipelines and tanker ships. With protesters being slaughtered by the score in Syria, and Yemen’s president about to get a one-way ticket to Palookaville, and the Saud family cowering in their solid-gold senior housing facility, and affairs looking sketchy at best in other nations around that neighborhood, speculators at the margins have called for higher oil prices.

You will recall, perhaps, that hoary old concept, the “bumpy plateau” of the peak oil story. This was the idea that the actual tippy-top “peak” of peak oil, studied at close scale, would actually take the form of a raggedy line representing the interplay between supply, demand, and most importantly the frantic psychological response of humans operating in markets.  It was clear that economies would stagger under the burden of high oil prices, and economic activity would contract, and people would use less oil and the price would go down. When prices were real low again, people would resume buying more oil (and other stuff) and economic activity would mount and oil prices would go up again. We knew this would happen for a couple-few cycles, and that then things would get… more interesting.

We also knew that this would occur with some “ratcheting side effects” – that with each cycle of up-and-down oil prices, against the background of permanent a decline in easy-to-get oil, there would be less money available to find, drill for, and produce future harder-to-get oil. What we did not know – at least in the morbid clerisies where academic economists spawn – was that the permanent decline in easy-to-get oil would introduce gross disorder into our money systems, nor that we would incessantly lie to ourselves about the health of our money systems, until their operations were so fatally compromised and impaired that their failure was likely to put us out-of-business even before worse imbalances came to pass in real oil supply and demand.

Of course, we also didn’t know that MENA would explode in political unrest in early 2011, or that the earth below the Japan Trench would shudder badly, and no doubt there are other things we can’t predict that will affect the global economic dynamic. But you do what you can with what you’ve got to work with, and here in the USA collective intelligence space, we’re not doing such a great job.

Tensions keep rising around the distortions and perversions now loose in the money system. You can get a headache thinking about inflation and deflation – but either way you stand to end up broke. Either you’ll be rolling in worthless money or you won’t have any money. The banana peel of destiny can send you flying in either direction, or first one and then the other.

We’ve done a poor job of managing contraction, which is the fate of societies that have piled up too much complexity. All of our schemes for grappling with this seem to boil down to one foolish obsession: how can we keep all the cars running? We’re not going to, of course, but we refuse to even think about anything else. President Obama is merely reflecting the foolish obsession of the public.

Whenever I give a talk at a meeting or a college, somebody gets up and censoriously asks we why I can’t present “solutions” to the problems of contraction we face. I do of course. The audience just doesn’t hear them because I don’t believe it is possible to keep all the cars running and I don’t pretend that any of the schemes currently circulating will avail. To go a step further, I’m convinced that we are committing cultural suicide by using all the cars the way we do, so I am not the one to look to for rescue remedies in this department. In fact, I am serenely persuaded that we would vastly improve our chances of remaining civilized if we gave up on mass motoring and deployed ourselves on the landscape differently.

By the way, that will be the eventual outcome anyway, whether we like it or not.

In the meantime, prepare for thrills and chills in the alternate universe of money. The phase of that story we’re approaching looks more and more like the final scenes of the old Todd Browning horror movie about the uprising in a freak show. America can have the role of the pinhead, grinning vacantly while the other freaks burn the joint down.

Mr. Kunstler is a prolific and talented author.  Some of his recent books include: “The Witch of Hebron,” “World made by Hand,” and “The Long Emergency.” To check out Mr. Kunstler’s bio (click here.) To go to his website (click here.)