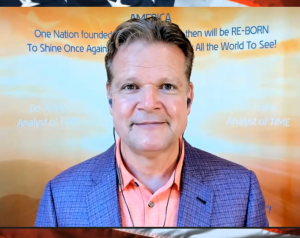 Biblical cycle timing expert and geo political and financial analyst Bo Polny says man cannot defeat the fraud, lies and murder being put into our world by evil forces alone.  Polny explains, “I don’t think anything can happen that man can create.  We are at a point where nothing can stop these people aside from a Biblical intervention from God.  That is really where we have come to.  We had a President who got kicked out, and now we have two Presidents in theory.  Nothing has stopped these people, and they will not stop until God intervenes.  We are at a point now where we are going to see a Biblical intervention.  Then we can talk about inflation.  It won’t be inflation, it’s going to be hyperinflation.  As much as people are looking at prices of things now, that is nothing.”

Where is all this inflation going to come from?  Polny says watch the U.S. dollar and says, “When God acts, he’s going to take down Goliath.  Goliath is like the time of David.  No one could take Goliath down. . . . Goliath is the U.S. dollar.  When the dollar drops in value because truth is revealed, the dollar is going to drop, and gold and silver are going to do a moonshot along with cryptos.  This is when you are going to see inflation.  Even though you see inflation right now, it’s nothing compared to what is coming.”

Polny says gold, silver and Bitcoin are all going higher.  Polny contends, “Bitcoin is not going to stop.  It’s going to blast through $50,000 and then head up to $80,000, and then it’s going to go higher. . . . The reason we are going to see these skyrocketing or explosive moves in Bitcoin and the crypto currencies is really only one specific reason, and that is the fall of the world’s reserve currency.  So, how does Bitcoin get to $200,000 plus?  It’s the fall of the U.S. dollar, which happens in the year of Jubilee, which is starting now. . . . Bitcoin is going to have a very powerful move this year, and next year it’s going to be pretty scary.  Bitcoin is going to have an incredible vertical move.  Then, there is a potential that Bitcoin will have a 90% price collapse next year.  So, you’ve got to be very careful next year.”

Massive voting fraud is being revealed all the way down to the local level.  This is due, in part, by people like My Pillow CEO Mike Lindell.  Polny says the key to all the crime at the polls comes down to the massive printing operation with the U.S. dollar.  Polny explains, “What’s been going on here is a system of bribes and payoffs that’s all been done via the U.S. dollar for decades. . . . These people didn’t just show up.  These people have been put in place over the last 10 or 20 years.  It’s been going on for a long time. . . . The 2020 Election goes down, and they got the result they wanted–the cherry on top.  They pay everybody else off. . . . How did they do it?  This is a spiritual battle. . . .This is a battle that’s been going on for centuries since the day Adam and Eve let evil onto this Earth. . . . All of this happens in the Year of Jubilee. (2021marks the 50th year since President Nixon took the U.S. off the gold standard). . . . We have to head back into November and restart all over again . . . . Everything that was signed will be undone.  Everything will be undone as if it never happened. . . .It’s going to be a new era, a new era of truth, and we are in an era of lies right now.”

(This write-up is only a small sample, there is more in the over 1 hour interview.)