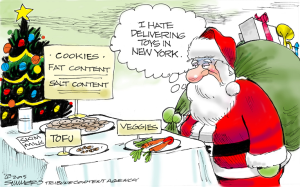 I have a few odds and ends in the news, but I am not doing a Weekly News Wrap-Up.  I am taking off for Christmas.  I really appreciate your cards and letters, but above all I appreciate all the comments that add to the content of USAWatchdog.com.  As I always brag, I have some of the smartest folks on the Internet commenting here.  Please keep doing it!!  The message video is after the break, so MERRY CHRISTMAS!!!!!