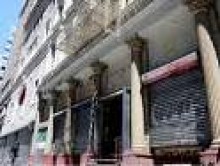 By Greg Hunter’s USAWatchdog.com  I think the problems we face as a nation are much more important than building a mosque in lower Manhattan.  The only reason I am writing about this is because it is an issue that I feel is being used to distract the country from the PROFOUND financial problems we face.  They have now got the attention of the military.   Adm. Mike Mullen, Chairman of the Joint Chiefs of Staff, warned last week that the national debt is the single biggest threat to national security!  I do not believe this is spin!  Mullen claims interest on the national debt will equal the entire defense budget by 2012–$600 billion in just interest.(Click here for the complete Mullen story.) There is also the issue of the U.S. being broke, and without “Enron” accounting  the country is really $202 trillion in the hole.  This, according to Boston University economics professor Laurence Kotlikoff.   (Click here for the Kotlikoff story.) Why don’t we hear politicians and the mainstream media open a national debate on these very important issues? That said, here is the way I feel about the Ground Zero Mosque.  I was living in New York City at the time of the 9/11 attack.  My wife stood on the roof of our 40 story building at 63rd and West End Avenue and watched the second tower fall.  I was in Colorado at the time on assignment and drove across the country on little sleep to get back home.  All the flags I came across on I-80 were at half mast.  It was a horrible and sad time in America. The whole country was hurting.  Everybody knows where they were and what they were doing when they heard the news of the attack.  My story is nothing special. I wish they would build the mosque somewhere else. I, like millions of other Americans, think it is in bad taste and insensitive.  Just because I think it should notbe placed so close to Ground Zero doesn’t mean I’m Islamophobic or a bigot.  If this really is all about “healing,” moving it would be the best PR move the Imam of the Ground Zero Mosque could make.  That probably is not going to happen, but I still hold out hope. Therefore, I fully support the right to build it there because I believe in the U.S. Constitution.  I believe in religious freedom and private property rights.  You cannot cherry pick what you believe when it comes to the Constitution.  I also believe people have the right to bear arms.  I despise gun control.  I believe in free speech, whether it is said by the Ku Klux Klan or the Black Panthers.  I think both groups are repugnant, but I support the Constitutional right for anyone to have their say in America.  I also believe in equal protection under the law, which is a major tenant of the founding fathers and the Constitution.  Guess where I stand on the gay marriage issue?  I am not a Klansman, a gun nut, gay, Muslim and I don’t own a home, but I am a citizen who believes in the Constitution—the whole Constitution. Recently, Congressman Ron Paul made a lengthy statement about the Ground Zero Mosque.   Here is his part of his statement: “Is the controversy over building a mosque near ground zero a grand distraction or a grand opportunity? Or is it, once again, grandiose demagoguery? It has been said, “Nero fiddled while Rome burned.” Are we not overly preoccupied with this controversy, now being used in various ways by grandstanding politicians? It looks to me like the politicians are “fiddling while the economy burns.” The debate should have provided the conservative defenders of property rights with a perfect example of how the right to own property also protects the 1st Amendment rights of assembly and religion by supporting the building of the mosque. Instead, we hear lip service given to the property rights position while demanding that the need to be “sensitive” requires an all-out assault on the building of a mosque, several blocks from “ground zero.” Just think of what might (not) have happened if the whole issue had been ignored and the national debate stuck with war, peace, and prosperity. There certainly would have been a lot less emotionalism on both sides. The fact that so much attention has been given the mosque debate, raises the question of just why and driven by whom? In my opinion it has come from the neo-conservatives who demand continual war in the Middle East and Central Asia and are compelled to constantly justify it. They never miss a chance to use hatred toward Muslims to rally support for the ill conceived preventative wars. A select quote from soldiers from in Afghanistan and Iraq expressing concern over the mosque is pure propaganda and an affront to their bravery and sacrifice. (Click here for the complete Ron Paul statement.) I want to wrap up this post with something I saw on The Daily Show with John Stewart.  There are plenty of issues I disagree on with Mr. Stewart.  Many people think he is a journalist—he’s not.  He often comes off-one sided and unfair.  I have seen him cut sound bites short to completely change the meaning of what is said just to make a fool of someone.   Please do not dismiss this as some liberal attack.  It’s not.  In this case, The Daily Show uses Charlton Heston’s own words to make a very big point.  Please watch the video and keep in mind this comes from a comedian who freely admits he does “fake news,” but in this case, he just might be telling the truth.