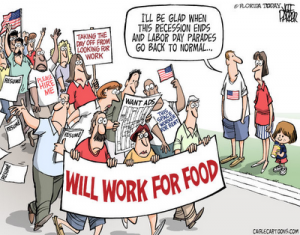 This is not going to be a long post today.  Everybody is going to be out cooking on the grill and having fun.  I just want to clear up one little number the Bureau of Labor Statistics (BLS) put out on Friday.  The BLS reported “zero” net jobs were created last month.  According to John Williams of Shadowstats.com, the jobs picture was more dire than reported.  In his latest post Williams said, “The U.S. employment picture is much worse than reported, thanks partially to the Bureau of Labor Statistics’ (BLS) use of gimmicked revisions, which are a natural fallout of the “concurrent” seasonal-factor adjustment concept used in the payroll survey (also used by other statistical bureaus in reporting series such as retail sales and new orders for durable goods).  The effect has been to mute the reported impact of layoffs. . .”  The U.S. lost 58,000 jobs from July to August according Shadowstats.com.  That’s right, the “zero” number of jobs created is really a negative 58,000 job loss!  How bad is it getting when “zero” starts looking pretty good?  The “jobs” speech President Obama is going to give this week is going to be interesting.  Happy Labor Day.