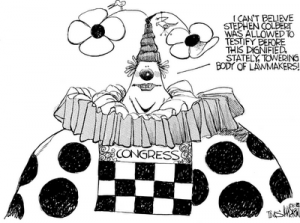 A bill that will make it more difficult to challenge improper foreclosure is going to be Vetoed by President Obama according to a Wall Street Journal story.  The bill quietly slipped through the Senate last week with a unanimous vote. (The House passed the bill in April.)  There was no public debate.  No one spoke up for the people fraudulently foreclosed on by big banks.  The bill got through because of a special Senatorial procedure.  Both Democratic and Republican leaders thought it was a good idea to make it harder for the average homeowner to fight the banks in foreclosure.  The  bill is called HR3808, or the Interstate Recognition of Notarizations Act of 2009.   It would “require any Federal or State court to recognize any notarization made by a notary public licensed by a State other than the State where the court is located . . .” If this became law, fraudulent and forged loan documents (proving the banks have the right to foreclose on a home) would have been much harder to challenge in court.  (Click here to see the complete HR3808,)

Here’s what the Wall Street Journal story said about this Veto, “The move marks the Obama administration’s most direct intervention so far into a growing debacle tied to how banks foreclose on homes, and the first effective veto of Mr. Obama’s presidency. The veto could make it more difficult for banks to complete paperwork and speed the foreclosure process, and could give homeowners more time to rework loans.  Several of the country’s largest banks, including Bank of America Corp., J.P. Morgan Chase & Co. and Ally Bank, have moved in recent weeks to halt thousands of foreclosures in 23 states amid revelations that the banking industry had used “robo-signers,” people who sign hundreds of documents a day without reviewing their contents.”  (Click here for the complete WSJ story.)

The folks at Zerohedge.com were a little more acerbic about the effect of HR3808.  Writer Tyler Durden summed it up as a “get out of jail card.”  Durden wrote yesterday, “. . . the legislation, if enacted, could protect bank and mortgage processors from liability for false or improperly prepared documents. In other words, with one simple signature Obama has the capacity to prevent tens of billions in damages to banks from legal fees, MBS deficiency claims, unwound sales, and to formally make what started this whole mess: Court Fraud perpetrated by banks, a legal act, and to finally trample over the constitution.”  (Click here for the complete Zerohedge.com story.)

This is probably one of the many reasons why the President is using his Veto power, but that doesn’t make this bill (and its timing) any less an outrage!  The members of the House and Senate who voted for it betrayed the people to help crooked bankers.  In my mind, what Congress did borders on treason.   The President is doing the right thing in Vetoing the bill.  It is also the smart political move before the mid-term elections.   Voters would have been even more outraged than they already are if this bill helped the banks commit foreclosure fraud.

I really do not know what Congress was thinking when they sent this to the President.  It would not have  magically given the trillions of worthless mortgage backed securities value again.  This bill would also  not have stopped the ongoing financial calamity.  It just exposed the true master of our Congress—the banks.  Senator Dick Durbin said it best last year on a local Chicago radio station in his home state of Illinois.  He blurted out, “And the banks — hard to believe in a time when we’re facing a banking crisis that many of the banks created — are still the most powerful lobby on Capitol Hill. And they frankly own the place.”

I fully support the President’s Veto on HR3808.  As for the money grubbing, two headed monster that is Congress—you sold out your country and you should be ashamed for trying this kind of end run around the courts and Constitution.