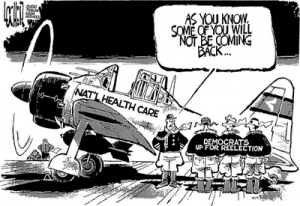 The Health Care Reform Reconciliation pakage making its way through Congress is shaping up to be an enormous battle.  The amount written and said about this legislation could fill a wing in the library of Congress.  The Republicans think it is “too expensive” and point out every accounting gimmick used to get the cost under a trillion dollars.  The Democrats say, “Passage of health care reform is of paramount importance” and point to a $138 billion deficit reduction over 10 years. The mainstream media is combing through the bill and checking every single fact.  You would think this was the single biggest financial problem facing America today, but it’s not even close.

According to Treasury Auction Watch, the U.S. Treasury issued $569 billion of new debt in February alone.  That makes $138 billion in deficit reduction over 10 years look like money found in your couch cushions.  You hear very little about the massive amount of government debt piling up from either party in Congress.

What about the Christmas Eve action taken by Treasury Secretary Tim Geithner?  He basically usurped Congress and took on the unlimited bailout of failed mortgage giants Fannie Mae and Freddie Mac.  He alone has chosen to bail out bondholders at the expense of the American people.  This single action represents nearly $6.3 trillion in liability to the taxpayer.  Why aren’t the Republicans saying this it “too expensive”?  Why isn’t the GOP exposing every detail of this boondoggle?  Why aren’t the Democrats thinking of this financial black hole as something “of paramount importance”?

The Federal Reserve is buying $1.25 trillion of mortgage backed securities or toxic assets.  This is basically buying more than a trillion dollars of mistakes and pawning it off on the taxpayer.  The Republicans are complaining about spending a trillion on health care over 10 years?  We just blew through more than a trillion bucks in a year and there’s not a word from the conservative party?

The Democrats say they are big on “deficit reduction.” There has not been a peep from the President about the Fed bailing out the hedge funds and banks in secret to the tune of trillions of dollars.  Why isn’t the leadership of the country trying to get to the bottom of this scandal?  I would personally just like to find out why the Fed gave a $500 billion bailout to foreign banks and which banks got the money?

By the way, Social Security will take in $29 billion less than it needs to pay retirees this year.  I’m betting SS will come up short next year and every year after.  The health care bill will collect new taxes for the next four years without offering any coverage until 2014.  Do you think some of these new tax dollars will be saved in a “lock box” for health care or be used for something else such as a Social Security short fall?

The country is on fire and spewing flames of red ink.  Congress should be in a room somewhere trying to figure out how we are going to pay for Fannie, Freddie, Social Security, two wars, insolvent state governments and trillion dollar secret Fed bailouts.  Instead, health care reform is the big issue.  The mainstream media is more worried about the NCAA March Madness than the insanity of America reaching a record $14.3 trillion deficit at the end of this fiscal year.