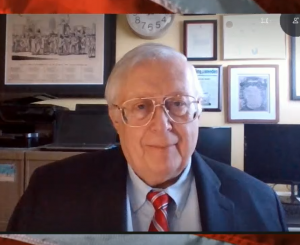 Economist John Williams says don’t think the happy news on CV19 vaccines is going to get the economy back to normal anytime soon.  Williams explains, “Put all the political turmoil aside for the moment.  The markets respond that this (CV19 vaccines) is going to turn the economy.  My point is it is not going to turn the economy . . . at least not soon because of what has happened to the economy and the severe structural damage.  We have had a lot of companies go out of business, in particular, small companies.  A lot of people have suffered, and we are going to have more of that going ahead.”

Because they has been so much damage done to the economy, Williams says there will have to be stimulus no matter who eventually makes it into the White House.  Williams contends, “Let’s say Trump gets re-elected.  He’s not going to have any choice but to increase stimulus to try to help the economy and help people.  If Biden takes over, he’s going to have to do the same.  He is already promising massive stimulus.  Where it gets really scary is if the Democrats can take control of the House, the Senate as well as the White House. . . . The stimulus there is going to be unbelievable. . . . The more radical Democrats will just print the money you need and spend whatever you need to spend it on, and don’t worry about it. . . . Whoever gets into power, there is going to be more deficit spending.  It’s just a matter of how radical it will be. . . . There is no way we are escaping massive stimulus for at least the next year and into 2022.”

Williams expects to see some very large inflation because of all the stimulus coming and predicts, “The more left we go, the more rapid will be the demise of the dollar.  Eventually, it will be a hyperinflation in the United States.  What I am looking at here is this evolving into a hyperinflationary Great Depression.  To save yourself, you have to preserve your wealth, your dollar assets.  To do that, you have to convert your dollars into physical gold and silver, precious metals and just hold them.  They will retain value over time as opposed to paper dollars that will effectively become worthless.  You’ll be getting a lot of money from the government, and they will keep giving you more and more and more, but that’s going to be an environment of rising and rising inflation.  It’s not necessarily going to buy you more. . . . Hyperinflation will bring political disruption. . . . Hyperinflation is a form of default.  Gold is telling us hyperinflation is straight ahead of us.”

Williams says, “When the Fed finally gets the more than 2% inflation it wants, the real inflation will be 12% to 15%. . . .  Hyperinflations happen quickly.”

Join Greg Hunter of USAWatchdog.com as he goes One-on-One with John Williams, founder of ShadowStats.com.

There is some free information on the homepage of ShadowStats.com.

For detailed hard hitting original reports, you can become a subscriber by clicking here.