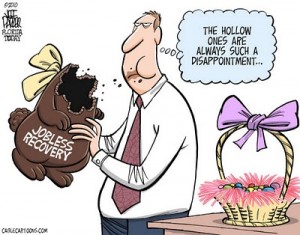 I heard Jim Cramer of CNBC say last night people are “ignoring the good news.”  I say when it comes to the mainstream media, just the opposite is happening.  The folks at the financial news networks are especially good at ignoring the bad news even though they should know better.

For example, we have been told non-stop that we are in a “recovery.”  We are clearly not.  Want proof that we are not in a “recovery?”  Just two days ago, Fed Chief Ben Bernanke said, “We are far from being out of the woods.”  According to a Bloomberg story, in a recent speech in Dallas, Texas, the Fed Chief was hardly trumpeting a huge turnaround for the economy.  Bernanke said, “. . . the U.S. faces hurdles including the lack of a sustained rebound in housing, a “troubled” commercial real estate market and “very weak” hiring. . .” (Click here for the complete Bloomberg story.)  Why is the Fed Chief, all of a sudden, not beating the “recovery” drum?  I think someone figured out that if they keep talking up the “recovery” and that does not happen, then the Fed will lose major credibility.

Sure, the economy looks like it stopped falling, but you have to keep in mind we spent trillions of dollars just to get to where we are now.  Taxpayers bailed out everything from car companies to insurance companies.  ALL the big banks got taxpayer charity, and the best we can do is bottom bounce?

If we really are in a “recovery,” then why is the Fed keeping its key rate at nearly 0%?   The Fed has repeatedly said this cheap money “needs” to remain for an “extended period.”  If this was a big “recovery,” wouldn’t the Fed raise rates?

Here is another ignored item.  The banks are holding trillions of dollars in toxic assets, or bad debt, in the form of all sorts of derivatives.  There is no telling what these things are worth because there is no public market.  Without a public market, there are no standards for derivatives.  There are not any guarantees, and regulation has been non-existent.  Most importantly, without a public market, there is no “bid/ask” mechanism that is essential in setting a price (price discovery).  I wrote about this in a post, last September, called “Can The Financial System Really Be Fixed?  Some Say No.”  (Click here for that post)

That’s why Wall Street says derivatives are “hard” to price.  You bet they are hard to price!  Nobody trusts the fantasy valuation, and there is no way to set a real price without a public market.  What do you bet if there was a “price discovery,” we’d find out some of this stuff is worthless?  I’ll also bet plenty more derivatives are worth a lot less than the banks claim, and that will spell big losses in the future.  Why do you think Wall Street is fighting financial reform so hard?

If you think banks don’t play accounting games with bad debt, then maybe this story, out yesterday, will convince you.  According to The Wall Street Journal, “Major banks have masked their risk levels in the past five quarters by temporarily lowering their debt just before reporting it to the public. . .”   That makes it appear the banks balance sheets are less risky.  I’ll bet it also justified some of those big bonuses too!  (Click here for the complete article.)  Uncertainty about the true value of assets in the banking system makes a real “recovery” impossible.

Here are another 138,000 reasons we are not in a recovery.  That’s how many people filed for bankruptcy last month!  An astounding 35% increase over February filings.  This increase is almost totally ignored by the mainstream media.

And ignore this–we have lost more than 8.3 million jobs since December of 2007.  We were told recently there was a big turnaround on the jobs front by the mainstream media.  When you cut out the temporary census workers, we supposedly created 114,000 jobs last month.  That job growth was so spectacular it did not even put a dent in the “official” unemployment rate of 9.7%.  Although, shadowstats.com says unemployment is really at more than 21%, if you calculated it the way Bureau of Labor Statistics did it prior to 1994.  After 1994, if someone is out of work for more than a year, then that person does not count according to the BLS.  They keep calling this a “jobless recovery,” but without jobs this is no “real recovery.”   Of course, all those unemployed people are probably just ignoring the good news.

(Editors note:  This post was late today because thunderstorms on the East Coast knocked out power in my area.)