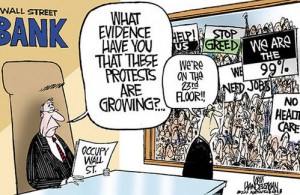 The meeting yesterday in Europe to come up with a plan to stem the sovereign debt crisis turned sour.  Zero was accomplished, except to put even more fear into the world over an impending financial meltdown that will likely be worse than the 2008 mushroom cloud.  The Telegraph UK is reporting, “During two hours of bitter exchanges during a meeting of all 27 EU leaders before a crisis summit of the Eurozone’s 17 members on Wednesday, President Sarkozy fought hard to get the Prime Minister barred from talks that would finalise a 100 billion euros cash injection into banks.  ”We’re sick of you criticising us and telling us what to do. You say you hate the euro, you didn’t want to join and now you want to interfere in our meetings,” the French leader told Mr. Cameron, according to diplomats.”  (Click here to read the complete Telegraph UK article.)  It appears members of the EU are having a hard time coming up with a plan which will, no doubt, be some sort of combination of bank failure, steep haircuts in sour sovereign debt, and money printing to pick winners.

So, what does Europe have to do with global inflation?  I figure if there is no plan soon, things may get out of control.  In this scenario, the ECB may be forced to print euros like crazy.  Meanwhile, the Fed would rev up its printing press at the same time to help fight off another out-of-control systemic failure.  This latest possible money dump falls against a backdrop of accelerating global inflation caused by multiple rounds of currency creation since 2008.

How bad is inflation around the world right now?  In Asia, Bloomberg recently reported, “Singapore’s decision to slow its currency’s advance rather than halt gains shows the dilemma facing Asian nations trying to tame inflation while protecting exporters from faltering economies in Europe and the U.S. . . . Singapore’s inflation will average about 5 percent this year and 2.5 percent to 3.5 percent in 2012, the central bank said yesterday. Consumer prices rose 5.7 percent in August from a year earlier.”  (Click here to read the complete Bloomberg report.)

In the Middle East, Business Intelligence reported last week, “Saudi Arabian inflation accelerated to 5.3% last month, its fastest pace since January . . . the Saudi Press Agency reported today, compared with 4.8% in the previous month. The cost of living index increased 0.9% in September from August, the report said. Annual inflation in January was also 5.3%.” (Click here to real the complete BI-ME.com report.)

In the UK, FXStreet.com reported last week, “What we are seeing though is the signs of inflation creeping up around the globe, most visibly in the UK who reported CPI of 5.2% inflation vs. the expectation of 4.9%. I thought that expectation figure yesterday had to be wrong, but boy was I mistaken. To be clear, the BOE has an inflation target of 2%, which means it is running more than twice their mandate. I’m sure the UK citizens love this as the economy slows down. Stagflation anyone?”  (Click here to read the complete FXStreet.com report.)   I don’t think the recent 75 billion Pound Sterling injection into the UK economy will slow down inflation there.

In the U.S., inflation is following the upward global path.  Shadowstats.com reported last week, “The September producer price index jumped by 0.8% for the month and 6.9% for the year, versus August’s unchanged monthly reading and 6.5% annual inflation.  Annual inflation in the September consumer price index again hit the highest level for the CPI-U series since September 2008. The CPI-U gained 0.3% for the month and 3.9% for the year. . .”  If inflation was calculated the way Bureau of Labor Statistics did it in 1980, the true inflation rate (according to Shadowstats.com) would now be “11.5%.”

Even if the EU comes up with a plan to avoid a repeat of the last train wreck, money will be created by the electronic truck load.  At the very least, global inflation will increase.  At the very worst, there could be hyper-inflation (especially in the U.S. dollar) and a systemic crisis.  I am sure higher inflation will be like throwing gasoline on a fire with the Occupy Wall Street protesters!