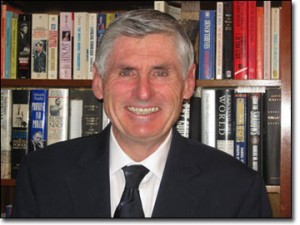 Macroeconomist Gordon Long says, “We’re not really running a capitalist system.  We are running a credit system.  Instead of using savings, we are using credit.  Credit, the way we are doing it now, is really a form of counterfeiting.  If you look at the $72 trillion shadow banking system that we have operating right now, that is generating this credit . . . it collapsed in 2008 . . . and now it’s on a hairy edge.  It’s not mortgages and housing this time.  It’s student loans through Sallie Mae.  These students don’t have any hope of paying this back.  We are talking north of $1.1 to $1.2 trillion.  It’s car loans this time because of subprime.  That’s the way to look at car loans, they are sub-prime. . . . And you got these highly leveraged real estate investment trusts also operating through the shadow banking system.  These problems are blatantly evident, and I don’t think the powers that be have any control over them.”

On the next financial crisis, Mr. Long contends, “I think 2008 was an early warning signal of the magnitude of the problem.  We didn’t fix it.  We did extend and pretend.  Dodd-Frank did not solve the underlying issues.  The global swaps market went from $600 trillion to $700 trillion last year, alone.  We’ve watched the shadow banking system push through $72 trillion.  So, we didn’t stop it.  We just, in fact, inflamed it even worse, and we got into even riskier kinds of assets.  Is it imminent?  No, I think we are talking 2015.  I think we have a little bit of a deflation scare before we get into the hyperinflation.  Don’t underestimate the central bankers and the politicians’ ability to kick the can down the road.  They still got some more bullets here.”

Will the crisis in Iraq get out of control?  Gordon Long says, “I happen to think that it probably will because we are not resolving the basic problems.  But the big core issue here is the petrodollar.  It’s not about oil and it’s not about gas.  It’s about what it is bought and paid for in, and that is U.S. dollars.  There is no one that trades any one of those products in anything other than U.S. dollars . . . right now, as of today. . . . As long as the trading continues in U.S. dollars, all those dollars will stay out there and not come back to the United States.  When it comes back to the United States, you will have hyperinflation.  These conflicts need to be seen in the context of they are really going to force groups to trade in other than the U.S dollar.  That’s the problem because they are going to come back.  They are going to say I have a U.S. dollar, and I am going to make a claim on it.  That’s what is going to drive the hyperinflation.  That’s what is going to drive the currency crisis.  This is about trading in the U.S. dollar. . . . We are looking at spring 2015 to Q three.  There is trouble there.”

On government debt and suspicious bond buying in places like Belgium, Gordon Long says the government has to keep finding was to sell Treasury bonds to finance the huge U.S. debt.  Long explains, “They not only have to sustain the buying, but they actually, right now, need a shock to the system, what I will call a bond scare, so money will move out of an over-inflated equity market. . . . And they need that to drive down the interest rates, push up the bond prices and get that financing charge much lower.”  Long goes on to say, “The real game that is going on here is a complex game, but it’s pretty simple, what they are trying to do and that is they are trying to finance the government’s debt.”

Join Greg Hunter as he goes One-on-One with Gordon Long of GordonTLong.com.

Gordon Long predicts the next big financial meltdown will involve “large pension funds and insurance companies, and it will be a global problem.  They are the ones driving the shadow banking system.”  If you would like to see more of Mr. Long’s work, which includes free material and paid subscriptions, go to GordonTLong.com.